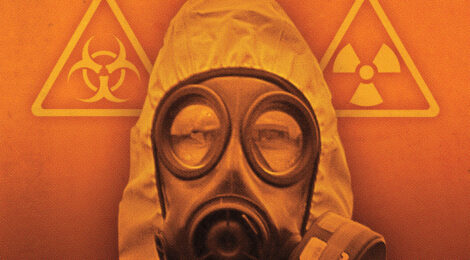 At 11 a.m., residents of the area bordering Oman’s Muscat Industrial District heard a loud explosion. In minutes, emergency sirens filled the air, signaling a heavy deployment of the Sultan’s Armed Forces (SAF) and Public Authority of Civil Defense and Ambulance (PACDA). Armored vehicles, police cars and crime scene tape cordoned off bystanders from the scene of the explosion.

Subject-matter-expert exchange activities began with reviews of Joint Sultan’s Armed Forces Standard Operating Procedures developed in October 2019, which covered the best methods for clearing contaminated areas, transporting affected patients, avoiding widespread contamination, and protecting first responders from the dangers of these types of weapons. Modern techniques for the detection of chemical and biological weapons were also reviewed. The Americans offered techniques on how to coordinate the work of different institutions to complete the mission. 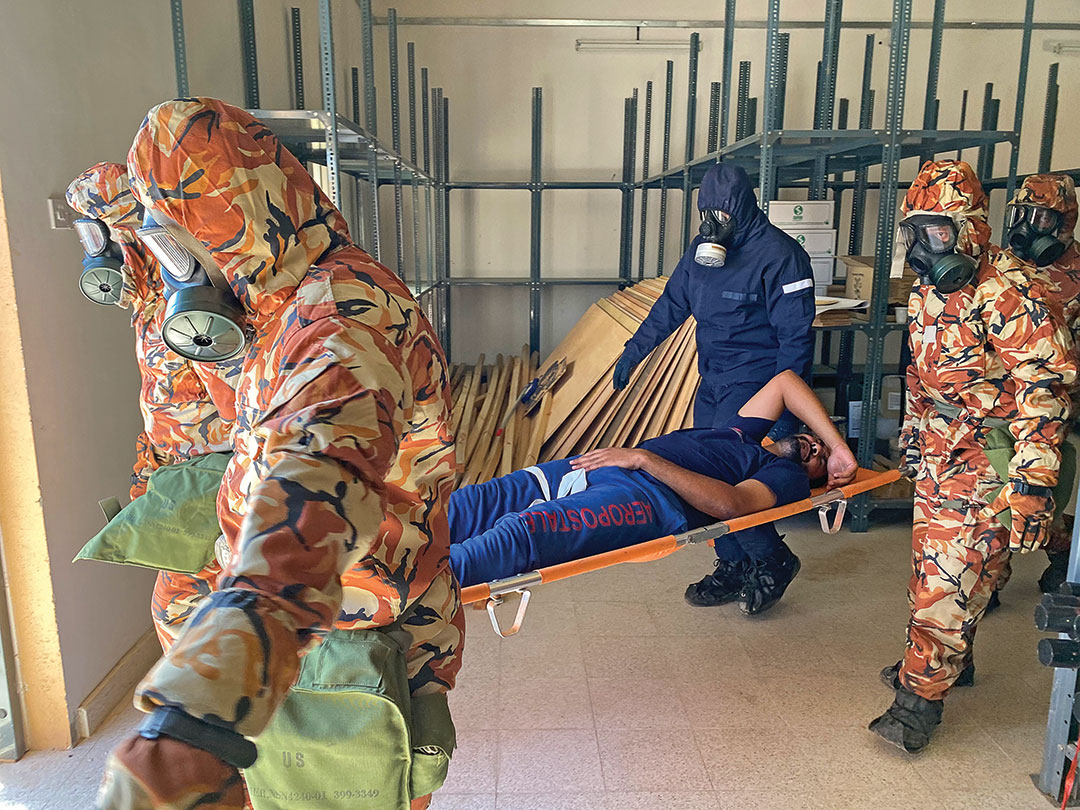 Simulated casualties are treated at a field hospital.

Additionally, a medical team specializing in combat casualty care went over how to treat cases in the field and expedite their transfer to hospitals as soon as bleeding is stopped and the patient is stabilized. Field medicine experts also illustrated the need to maintain stocks of medical equipment and avoid exhausting supplies.

Notably, the Americans participated with the full breadth of their countering-WMD enterprise, just as they have in previous years. CENTCOM’s CWMD Division brought in the Defense Threat Reduction Agency, the Joint Program Executive Office for Chemical, Biological, Radiological and Nuclear (CBRN) Defense, and operational leaders from the Air Force, Marine Corps and Navy component commands.

SAF specialists skillfully explained standard procedures  to prevent toxic gas leaks and contamination caused by defects at petrochemical plants and pesticide repositories or by chemical or biological weapons attacks. Experts explained how to respond based on the nature of the incident and how a command and control headquarters, a decontamination center and field hospital could be set up to deal with injuries. The Americans greatly appreciated these discussions. It was clear that Oman CBRN leaders and specialists remain proficient, and the partnership, first established in 2016, continues to grow and evolve.

SAF’s explosive ordnance-disposal (EOD) team and its U.S. military counterparts reviewed robot technology for dealing with improvised explosive devices, or IEDs. The task force received training in the operation and maintenance of the device and how to deal with any possible malfunction or damage in the field.

Since the first exercise in 2016, it has become customary to conclude with a joint demonstration responding to an incident or attack, but this time the Omani team asked to lead the wrap-up exercise alone with the U.S. team acting as observers. The concluding scenario simulated real events in countries where terrorism is active. The response began after citizens were notified of suspicious activities within a vacant pesticide complex:

“There are several reports from Omani citizens of suspicious activities at the vacant pesticide complex. Residents haven’t noticed any activity at the complex prior to the suspicious activity since it was closed almost two years ago,” the report read. “Large cargo trucks were seen three nights in a row leaving the vacant complex between 2 a.m. and 4 a.m. One witness submitted a written statement talking about the storage of several 55 gallon drums and other equipment. The accuracy of the information could not be confirmed due to limited visibility and the reporting individual’s unwillingness to be seen observing the movements.” 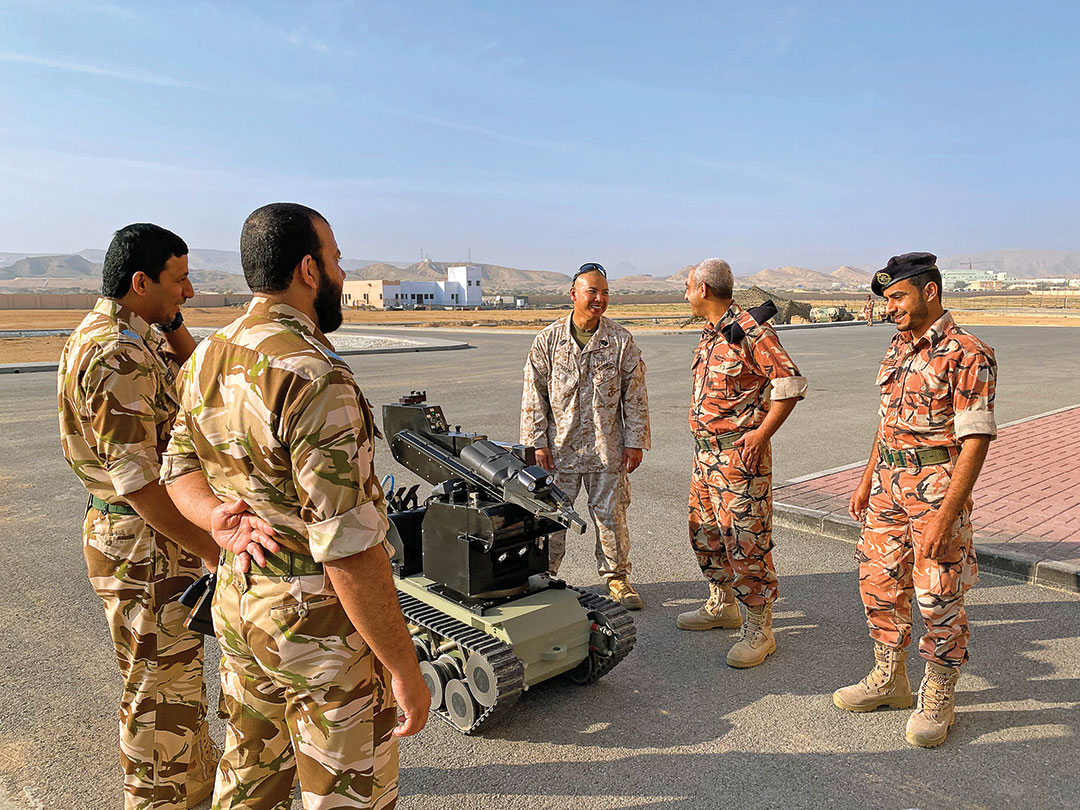 In light of that information, the Ministry of Interior sent a police patrol to investigate. Its arrival at 11 a.m. coincided with a loud explosion that shook the ground. The patrol contacted PACDA, and SAF was informed of the incident. Within minutes, response teams arrived, and a security perimeter was imposed on the area. The rapid exchange of intelligence and the evolution of the situation prompted the Ministry of Interior to request explosives experts and a WMD prevention team, given the nature of the site and the presence of suspicious barrels.

At 11:15 a.m., the SAF WMD prevention team, led by Lt. Col. Al-Bouromi, arrived to take command from PACDA. He ordered the decontamination unit to set up 300 meters from the scene. The military medical team arrived at 11:16 a.m. and set up a field hospital 600 meters from the target site. Meanwhile, the reconnaissance team and PACDA personnel arrived in protective equipment to carry out the mission.

At 11:25 a.m., the EOD reconnaissance team (two Soldiers) and the PACDA team (four members and a gurney) entered the restricted area 200 meters from where a Soldier in full protective equipment received orders from field commanders giving permission for the teams to enter the area. After confirming that the team was wearing protective equipment, the guard recorded names, ranks and destinations of those authorized to enter.

The reconnaissance team began inspecting the site, checking for explosives and examining the ground for other materials. They surveyed the perimeter and discovered a vehicle-borne improvised explosive device (VBIED). The team made notes and diagrams of the vehicle’s contents and inspected the building entrance for booby traps. Inside were two civilians who were injured during the explosion. The reconnaissance team requested an ambulance to transport the casualties and other units to inspect the building and secure the VBIED.

The first casualty was unconscious and bleeding from a gash on the upper back. The second was stable with a cut on the upper right thigh and some bruising. Each casualty was assigned three medical staffers: a team leader who took notes and two nurses who examined the patient for any other injuries. The stable patient was questioned about what had happened and about his medical history while the second casualty had his bleeding stopped, an IV attached to his arm, and an injection of painkillers for transport to the hospital.

At 11:20 a.m., EOD and PACDA teams entered the restricted area, and the robot was prepped to approach the VBIED. A schematic of the VBIED found in the pesticide plant showed it contained three 155 mm artillery rounds and two 55-gallon drums of sarin gas prepared for remote detonation. The robot disarmed the VBIED, and the EOD team safely removed the projectiles as the WMD prevention team secured and transported the sarin drums to a chemical analysis lab to determine their composition and manufacturer. In addition, the team conducted a final survey of the area and ascertained there were no risks of biological and chemical contamination inside or outside the warehouse.

Upon completion of the mission, the team proceeded to the field decontamination detachment, where members were sprayed down before and after removal of equipment to prevent escape of contaminated material beyond the area of operations.

At noon, after collecting forensic evidence from the site, the warehouse was cleared and sterilized, and the field hospital and decontamination unit began withdrawing. At 2 p.m., the site was handed over to police to complete criminal investigations. The security perimeter was dismantled.

Four hours of meticulous work simulating real-world events, during which the men of the SAF and PACDA and medical personnel performed heroic work, was a testament to their training, superior performance and professionalism. Despite sweltering temperatures, everyone worked in full protective gear, many under the hot sun without shade. Teams worked harmoniously to accomplish a death-defying task affecting the sultanate’s national security.