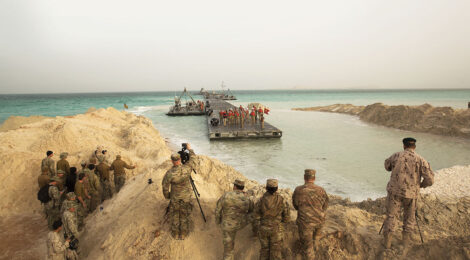 Unipath / January 4, 2021 / Comments Off on Partners in Preparation / Features

The crash of explosions shattered the stillness of the morning as Apache helicopters bombarded enemy positions on the outskirts of the city. The enemy’s anti-aircraft guns tried to mount a defense but were swiftly silenced by the firepower of the armored vehicles of the 83rd Battalion of the Sheikh Khalifa bin Zayed Mechanized Brigade. The brigade — one of the finest in the United Arab Emirates (UAE) — rolled up the enemy’s defenses to seize the oil-producing city of Al Hamra.

The assault — a drill at the Native Fury military exercise — and Al Hamra — an artificial town founded to train Soldiers — produced a lifelike scenario that capped the monthlong exercise between the UAE Armed Forces and the U.S. Marine Corps.

Running from March 8 to April 5, 2020, the exercise comprised numerous training events designed to improve interoperability between Emirati and U.S. forces. They included the live-fire exercise, a coordinated response to a chemical weapons attack, medical evacuations and removal of improvised explosive devices. Despite the threat of the COVID-19 virus, the partner militaries persevered and completed their training mission. 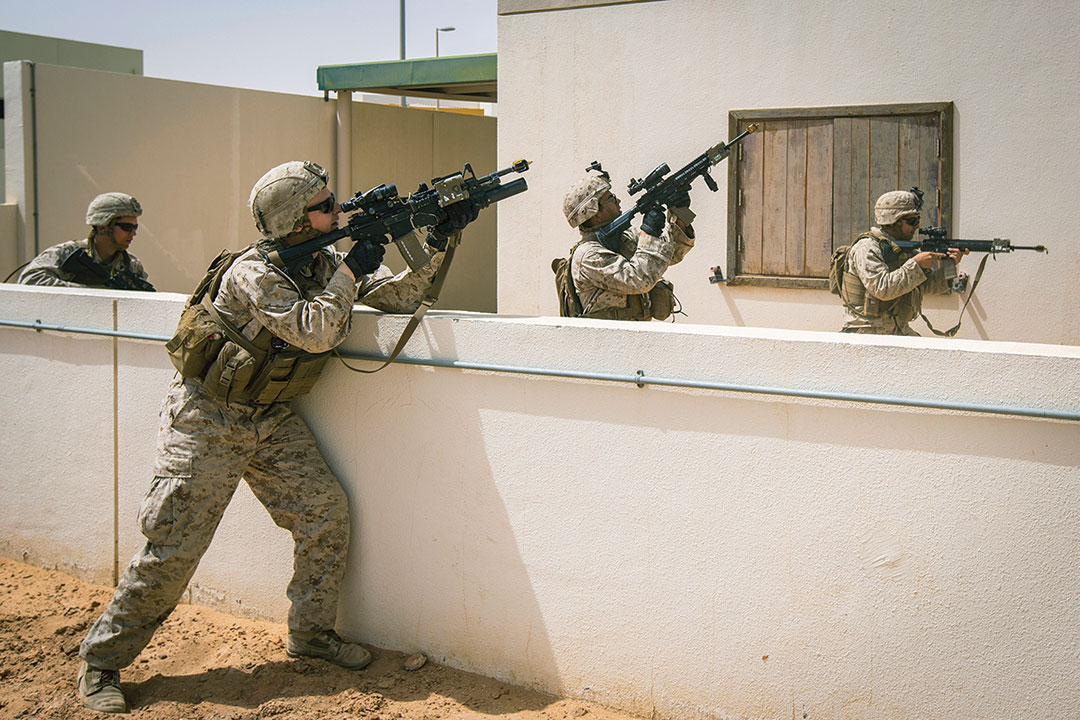 “We in the United Arab Emirates believe in international partnership for comprehensive stability in the region,” UAE Exercise Director Brig. Gen. Tariq Al Zaabi said. “The security and stability of the region is a guiding principle of the state, and we will strive to achieve it.

“This exercise of ours has passed through some difficult circumstances, as the whole world faces up to the spread of the coronavirus. But despite this epidemic, we completed the exercise in the best way possible because we believe that this exercise is important not only for the region but for international security.”

The highlight of the exercise was a multinational mission to liberate Al Hamra. For purposes of the exercise scenario, it was classified as a city of 50,000 in the UAE’s Western Region, 200 kilometers west of the capital, Abu Dhabi. Al Hamra’s strategic importance was emphasized: It lay on the coast and possessed a major oil refinery, a hospital, an airport and government buildings. Recognizing the city’s importance, the enemy chose to occupy this region with a mechanized battalion. UAE and U.S. forces conceived a counteroffensive to dislodge the invaders.

U.S. Marines executed an amphibious landing 10 kilometers east of Al Hamra and constructed a kilometer-long floating bridge from the landing craft to the shore. The causeway was assembled at sea and towed into the landing zone by tugboats. Within hours, the 1st Marine Regiment and all its equipment were deployed and ready for the counterattack in Al Hamra.

The UAE Joint Task Force fell under the command of Brig. Gen. Ahmed Bisho. Col. Kevin Clarke commanded the 1st Marine Regiment. The two commanders focused their efforts on a joint plan to secure the city and oil refinery, calling the operation SLAM. 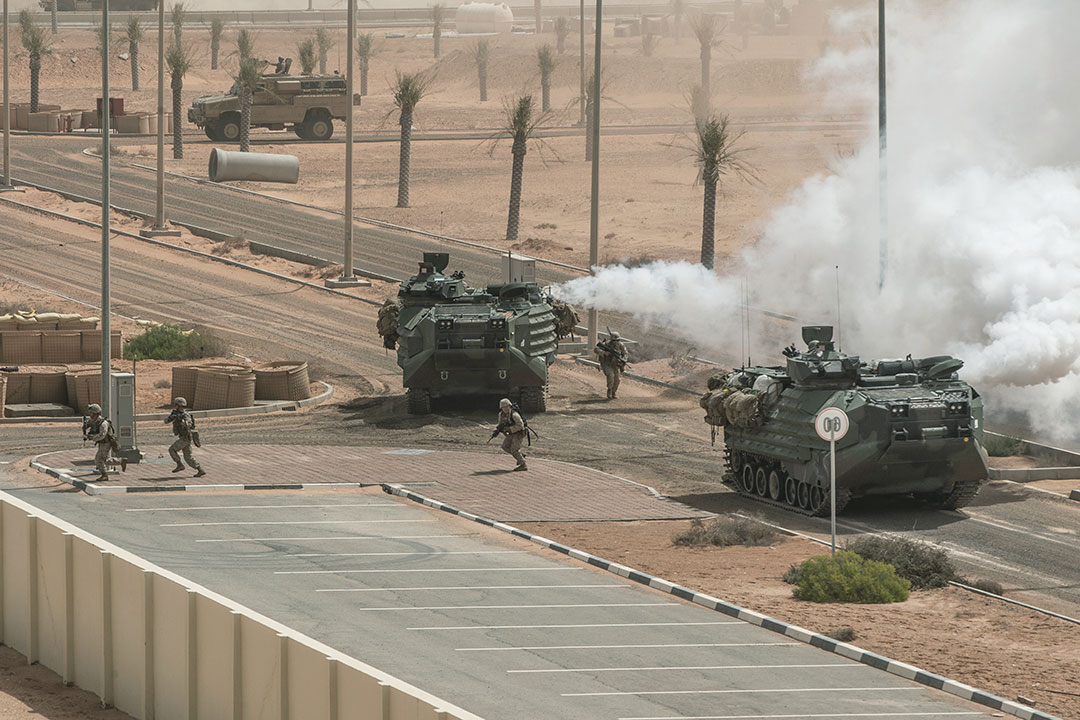 The enemy enlisted militias in civilian clothing to infiltrate the population, intimidate them, and use them as human shields. The militias joined forces with light infantry to sustain fighting in the city center. A hostile mechanized battalion on the outskirts of Al Hamra was the enemy’s first line of defense. The deployment of surface-to-air guns was meant to impede U.S. and UAE air power.

In the first phase of the joint task force’s plan, Radban amphibious infantry fighting vehicles of the 83rd Mechanized Battalion stormed Al Hamra from the southwest. Heavy fire from the vehicles’ advanced guns confused the enemy and smashed its defensive lines. A water barrier the enemy imagined would stop UAE troops proved to be illusory. Amphibious Radbans plunged into the river at top speed, plowing through the water and dispensing troops on the opposite bank.

Apache helicopters surprised the enemy with concentrated fire east of the city near the airport, clearing the way for the al-Fursan Brigade, which was being airlifted to the scene of the fighting. Black Hawk helicopters arrived at the airport and released al-Fursan Soldiers from rappelling ropes. This was phase 2. A battle erupted in the vicinity of the airport and the outskirts of the city, where enemy militias were concentrated. Al-Fursan commanders deployed robots for deep reconnaissance behind enemy lines and relayed the battlefield intelligence to troops on the ground.

Once the joint command received word of al-Fursan’s success, Chinook helicopters appeared on the horizon to carry out phase 3 of the attack.

Within minutes, a Chinook landed, and U.S. Marines poured from the rear of the helicopter, splitting into two groups to cover al-Fusan’s right flank. The Marines brought military dogs to sniff for explosives and enemy hiding places. Rooftops, alleys, and houses were cleared by Marines and al-Fursan working in tandem. Al-Fursan’s capture of Al Hamra mosque signaled completion of its tactical objectives.

Phase 4 began with Marines advancing westward into the city center supported by high-speed armored vehicles, which entered the area from the airport’s eastside. Heavy fighting continued for 30 minutes. After encircling the site, the attacking force issued a warning to the enemy fighters through loudspeakers: “We are the U.S. Marine Corps. Drop your weapons and surrender immediately. The area is completely surrounded.” Minutes later, after the residential area was cleared of enemy remnants, Marines launched a flare to declare that UAE and U.S. forces had full control over the city. 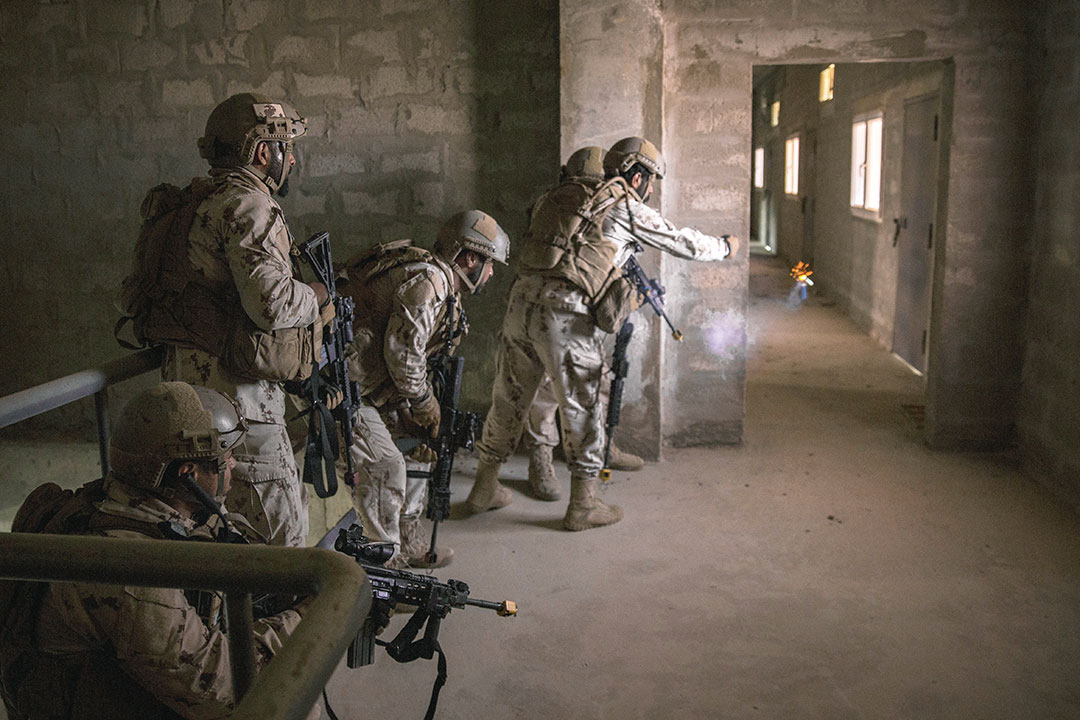 All parts of the exercise were carried out with a high level of professionalism and precision, demonstrating the field experience of the joint forces. Observers noted that the U.S. Marines and Emirati troops appeared to have been training for this final live-fire demonstration for months, rather than just 10 days. The use of modern technology by al-Fursan within built-up areas was notable, as robots proceeded in front of the troops, negotiated obstacles and pinpointed enemy positions. So coordinated were the movements of the joint forces that at a distance of 200 meters from the battlefield and landing site, observers could not distinguish between U.S and Emirati troops.

U.S. Ambassador to the UAE John Rakolta Jr. noted that multinational missions of the sort demonstrated in Al Hamra have become a requirement of global security. “We consider the United Arab Emirates to be a strategic ally of the United States of America,” he said. “On behalf of the president, I would like to thank you for what you are doing, not just for your country or for the United States, but for humanity and the search for sustainable peace in the region.”

An Urban Setting for Urban Warfare

When a field officer is asked about his needs as a commander — before mentioning even technology and armaments — he will insist on the necessity of developing and training subordinates for combat.

It was with that purpose in mind that the United Arab Emirates (UAE) unveiled a simulation of a city called Al Hamra in 2017. At first glance, an observer would never know that Al Hamra, situated in the country’s Western District, was built for training Soldiers. That’s because its buildings, streets, and amenities so closely resemble those of any other city in the world.

In the town center stands a large mosque with a dome, minaret and parking lot. The city contains a 9,000-seat soccer stadium with an Olympic-size playing field, residential apartment blocks and a gas station. An artificial river splits the city in two, and a bridge connects its banks. Al Hamra’s designers didn’t stop there. On the city’s outskirts sprawls an airport complete with control tower.

As with much of life, the art and science of warfare is constantly evolving. No army can be prepared for any emergency unless it keeps pace with these developments and integrates lessons via training and maneuvers. In the worst case scenario, armies may learn lessons the hard way through brutal combat. But even if they emerge victorious, these lessons will inevitably be costly if armies have not prepared in advance.

After the fall of Mosul and other Iraqi cities to Daesh terrorists, military and security leaders became preoccupied with the challenge of defending and liberating densely populated civilian centers from terrorist gangs. Conventional armies trained in traditional tactics fall far short in their preparations for asymmetric warfare, such as close-quarters combat, amid a tangle of urban alleyways.

Owing to the difficulty of maneuvering military vehicles, aircraft, and equipment down narrow streets and distinguishing innocent civilians from enemy combatants, urban warfare is a supreme challenge. Street fighting and counterinsurgency tactics are taught in military academies, but the theory rarely duplicates the reality on the ground.

Complicating matters is the existence of regimes that arm and train militias that act as auxiliaries to their national militaries. These militias are tasked with repressing their populations and are sent abroad to train foreign militias to be used as foreign policy leverage for the regime. Such is the case in Yemen, Syria and other parts of the world. National armies confronted by these unconventional opponents have turned to creating training centers that mimic villages of the type in which hit-and-run guerrillas might lurk.

Nevertheless, most of these training centers are constrained in size and cannot accommodate a brigade-size force. That’s what prompted the United Arab Emirates — which has a small yet powerful professional Army equipped with the latest military equipment — to build Al Hamra. It contains almost everything an army needs — in its natural and fabricated obstacles — to give Soldiers a more realistic sense of asymmetric urban combat.

Al Hamra is an important facility for training UAE and friendly forces on the latest developments in combat and a critical pillar for supporting Emirati security forces to face all potential challenges.