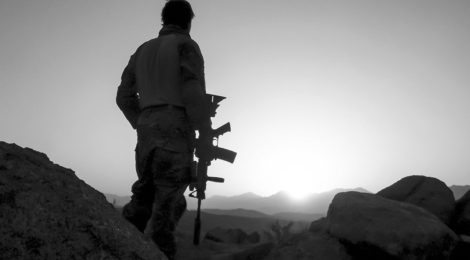 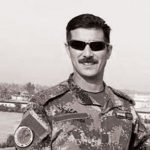 When the dust churning from tank treads mingles with columns of smoke streaming from vehicle-borne improvised explosive devices — clouding the progress of battle — Soldiers are motivated by courageous leaders noted for their sound instincts and conspicuous bravery. Such military leaders inspire troops to fight as heroes and defeat the enemy.

One such commander is Brig. Gen. Arkan Jalal Fadhel al-Tikriti, the 1st Special Forces Brigade’s Chief of Staff. When the Joint Operations Command needs someone to resolve intractable battles, the name Arkan al-Tikriti resounds throughout the command centers.

Brig. Gen. Arkan entered military college in 2001 as part of a special forces class. After 2003 he joined the 1st Brigade Quick Response Force. He was selected by the coalition forces to continue his military education outside Iraq after having passed all competitive tests with superior scores.

Brig. Gen. Arkan’s memory teems with heroic stories. He participated in most of the battles against criminal gangs and armed groups in Basra, Maysan and Diyala and after the emergence of Daesh in Jarf al-Sakhr, Ramadi, Fallujah and Mosul. But the battle of Barwana is special because it was the first in which Iraqi forces defeated Daesh gangs after the setback in Mosul.

“In October 2014, I was tasked to leave the defensive positions south of Ramadi and move immediately toward Barwana, about 170 kilometers west of Ramadi. We left the fighting in Ramadi and headed to the other front without a break and exhausted by the ferocity of the fighting and the roughness of the desert road to Barwana,” Brig Gen. Arkan said.

“Our task was to prevent Daesh from taking control of Haditha and expelling them from Barwana. Barwana strategically controlled the main road between Haditha and Haditha Dam, which placed the dam under Daesh’s control and cut supply routes. The Haditha Dam is one of the most important sources of electrical generation and controls the flow of the Euphrates River.”

Brig. Gen. Arkan believes that Iraq’s strength resides in its multiethnic character and that there is no place for sectarian strife within the ranks of the Armed Forces.

“The secret to the strength of the Counter-Terrorism Service is that we work as a team, above the sectarian and regional level, and that is why our forces were coherent and fought valiantly, and the enemy could not achieve any superiority against us,” he said.

His theory of overcoming the enemy in an unconventional war entails using professional Soldiers trained to fight in small groups without the need for exhaustive orders.

“Continuous training and selection of outstanding fighters is the cornerstone of building a professional force that can fight in the most difficult circumstances of unconventional warfare, and all fighters are trained in urban warfare,” he said.

“So we draw up our plans at the small group level led by noncommissioned officers, lieutenants or small group commanders within the framework of the main objectives of the supreme command. This is characteristic of the anti-terrorism forces in the rest of the formations in the battles of Mosul and Fallujah.”

In Brig. Gen. Arkan’s view, gaining the trust of the population is the cornerstone for defeating terrorist gangs and liberating cities.

“Densely populated areas make it difficult to fight because of the need to protect civilians. Sometimes there are civilians in the area just hundreds of meters from the front lines. Our Soldiers know the inhabited houses and try to drive the terrorists away,” he said. “We shared our water and food with these families and checked on them every day, which persuaded them to become our eyes on the battlefield.”

Despite the crimes Daesh committed against innocent people, and despite the fact that they disrespected the bodies of Iraqi Soldiers, Brig. Gen. Arkan issued orders for Soldiers to treat prisoners well.

“Our main advantage is that we are professional fighters who respect human rights laws and are committed to military law and an institution governed by international charters. Our fighters have been trained to apply and respect these laws,” the brigadier general said.

“During the battles we captured two foreign fighters in the Haditha area. We handled them with all humanity and respect and treated one of them for injuries before handing them to the competent authorities.”

Half of the Iraqi victory is attributable to information and psychological operations, Brig. Gen. Arkan said.

“Gangs have been able to invade cities and towns easily, relying on spreading rumors, fear and anxiety among the population and the security forces, so we have to have an electronic army to combat terrorism on social networking pages, expose their lies and track their activities.”

← Jordanians in Afghanistan
Teamwork With a Multinational Twist →