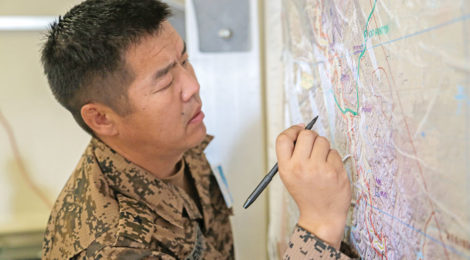 Teamwork With a Multinational Twist

Unipath / July 16, 2019 / Comments Off on Teamwork With a Multinational Twist / Features

The criminal named Abdul Kabeer was running a drug smuggling operation, slipping across an international border in a truck authorized to haul humanitarian aid. Special operations forces received a tip that the aid shipment was a sham and that Kabeer was aligned with terrorists.

The multinational command post flew into action — Afghans, Mongolians, Tajiks, Uzbeks and U.S. forces — and drew up a plan of assault.

Two teams of special forces troops would conceal themselves on hills overlooking the road on which Kabeer’s truck approached. With cooperation from conventional forces manning a checkpoint farther down the road, coalition forces planned to intercept Kabeer’s truck.

“They have to capture him alive. He’s the leader of the smugglers, and we need to get more intelligence from him,” Afghan Lt. Col. Abdul Basir Masoud said. 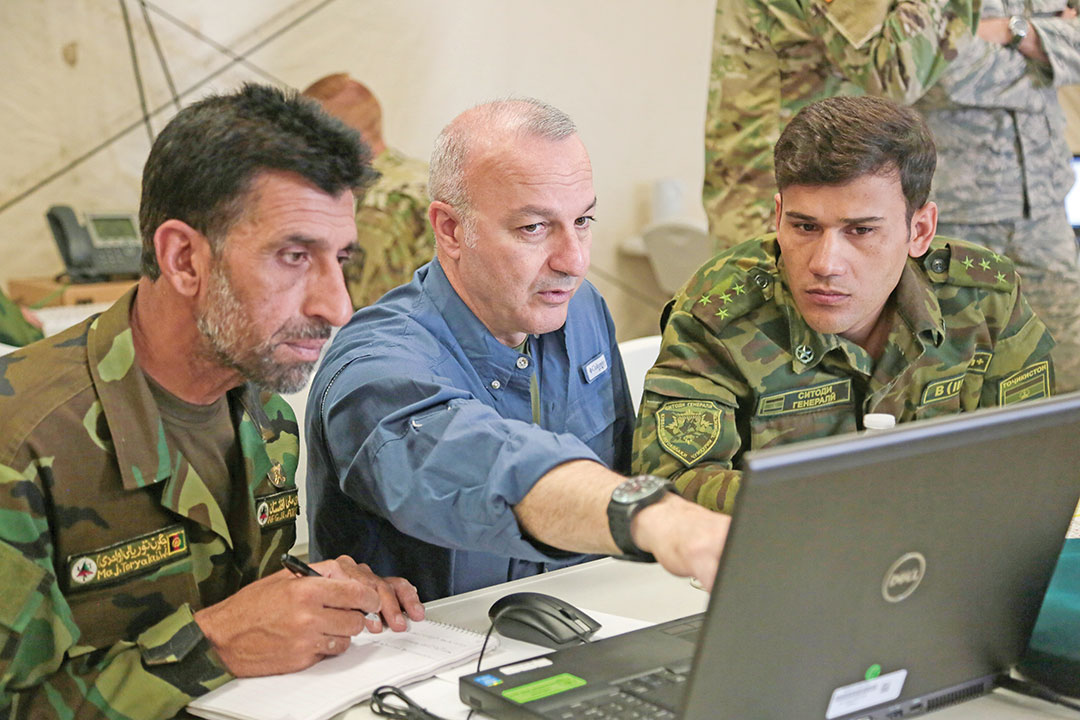 A translator explains an exercise scenario to an Afghan Soldier, left, and a Tajik Soldier.

Scripted but realistic scenarios such as these filled five days of a command-post exercise called Regional Cooperation 2018. More than 200 multinational troops assembled at Camp Edwards, a military base in Massachusetts in the United States, to simulate a border stabilization mission complicated by the fact that troops came from different countries and spoke different languages.

In the training scenario, Mongolian, Tajik, Uzbek and U.S. battalions — called Task Force Patriot — were stretched along the border of the hypothetical nations of Registan and Bahoristan. Afghan participants led the Combined Special Operations Task Force that worked in conjunction with Task Force Patriot.

The main task facing exercise participants: Function as a headquarters staff directing the actions of TF Patriot and the Combined Special Operations Task Force. More than 30 Russian and Dari linguists ensured smooth communication whenever the multinational Soldiers, hunched over maps and laptop computers, came up against language barriers.

Absent from Regional Cooperation for several years, Uzbekistan provided highly motivated troops eager to grapple with the scenarios. Uzbekistan had observed the exercise before but never participated directly.

“We are personally very interested in how the exercise is planned, how different it is from our exercises at home — everything new we can learn here to adopt in our own country,” said Lt. Col. Enver Madjitov, senior officer of the Uzbek delegation. “And, of course, we want to meet multinational colleagues.”

Actual Afghan commandos flew to Massachusetts from Kabul to lend the exercise a strong dose of realism in staffing the special operations headquarters, including the presence of a noncommissioned officer.

“Afghanistan is a war-torn country. I’ve experienced different situations in my country that I can pass on to my colleagues at the exercise,” said Lt. Col. Esmatullah Emami of Afghanistan’s Special Operations Command. 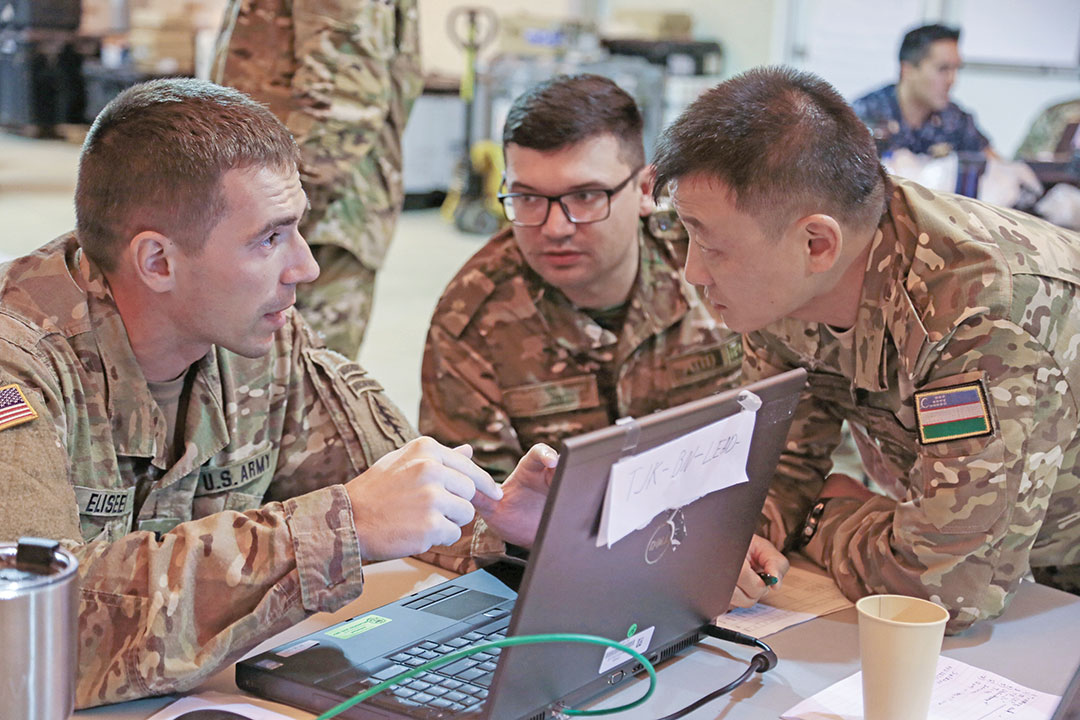 Two participants from Uzbekistan train with
a Russian-speaking
American Soldier.

“This training is relevant to my duties in Afghanistan,” Afghan Special Forces Maj. Mohammed Nazir Saleh said. “I’ve shared my experiences as a special operations officer with these other countries and the U.S.”

Tajik Col. Anvar Ahmadjonzoda also stressed the importance of teamwork and sharing military experiences. He appreciated that the terrain of the fictional countries — plenty of mountains split by river valleys — in many ways mimicked that of his region.

The Mongolians used Regional Cooperation to prepare for multinational peacekeeping missions such as those sponsored by the United Nations.

“Our officers and noncommissioned officers are able to enhance communication techniques and planning procedures that enable us to work more efficiently within a coalition environment,” said Col. Baata, the senior Mongolian officer in attendance.

U.S. Army Maj. Robert McCracken, U.S. Central Command’s lead exercise planner, said the purpose of the exercise is to improve the ability of South and Central Asian nations and the U.S. to respond collectively to crises.

“The exercise helps us improve our ability to plan and coordinate as a multinational organization and promote information sharing between military and civilian organizations,” Maj. McCracken said.

The crisis fell under the headings of counterterrorism, border security, counterproliferation, counternarcotic trafficking and stability operations.

Portraying the media was a fictional broadcaster called the World News Network whose online news updates exercise participants needed to consider in their deliberations. When the fictional terrorists issued propaganda, special operations forces responded by disseminating counterpropaganda via radio, newspapers and leaflets.

“I’m supposed to investigate and respond based on information I received and pass that information to my commander and the whole team,” Lt. Col. Ernazarov said as news of the simulated mustard gas attack filtered into the tent hosting the special operations headquarters.

Uzbek Col. Madjitov occupied another tent with the other deputy commanders of Task Force Patriot — an Afghan, a Mongolian and a Tajik.

Using a mixture of Russian, Dari and Tajik — the latter two languages mutually understandable dialects of each other — those senior officers coalesced as a team.

At the end of each day’s training, the national delegations took turns hosting parties featuring food and music traditional to each of the attending countries.

Col. Madjitov was not only eager to conduct further exercises with U.S. and Central Asian partners, he planned to share what he learned at Regional Cooperation with Uzbekistan’s military academies.

“All the challenges in the region provide us incentives to cooperate with each other,” Col. Madjitov said.