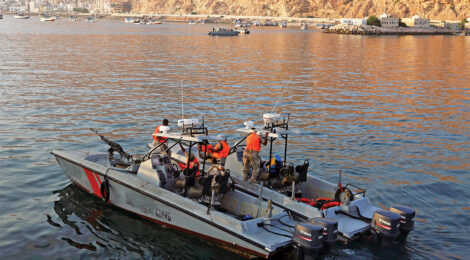 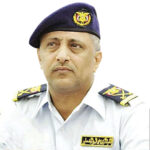 The Republic of Yemen occupies an internationally recognized strategic location with a coastline that extends south from the southern Red Sea, through the Bab el-Mandeb at a critical maritime chokepoint, before turning east along the Gulf of Aden and onward into the Arabian Sea and Indian Ocean.

The vital international shipping lanes that run along Yemen’s coast mean that Yemen’s maritime security is vital to ensure the continued safe and unhindered flow of commerce. Closure of the Bab el-Mandeb would force ships to take an extended route around the Cape of Good Hope, severely increasing costs and time with direct consequences for the world’s economy as a whole, not least of which is Yemen’s.

Therefore, the Yemen Coast Guard (YCG) was established by Republican Decree No. 1 in 2002 and started its duties in 2003 as the single maritime law enforcement entity in Yemen along its 2,400-kilometer coastline. The Coast Guard’s duties include security of Yemeni ports and territorial waters and countering smuggling, illegal immigration, human trafficking and piracy.

The YCG is commanded by Maj. Gen. Khaled Ali Mohammed, who is keen to regenerate the YCG’s capability in providing maritime security, which has been degraded from the war. The United Nations Office on Drugs and Crime supports the plan by providing assistance and training to the YCG and intends to help rebuild the YCG’s infrastructure and skills, including boat maintenance.

Before the war, the YCG benefited from a comprehensive and integrated support package provided by the international community, with significant U.S. provision of money, equipment and training, as well as other donations of equipment and training from countries such as the United Kingdom, France, Germany, Italy and Japan. The aim was to establish and develop a sophisticated and nationally run Coast Guard capable of protecting sea lanes to the Gulf of Aden and through the Bab el-Mandeb.

The project was about 70% complete and recognized as extremely effective, particularly in the Gulf of Aden and Red Sea. Unfortunately, as a result of the coup against the legitimate government and the ensuing bloody war, most, if not all, of the infrastructure has been destroyed or is beyond repair. Consequently, any initiatives to support the renewal of the YCG must take into account that full scale reconstruction is required.

The Yemeni coast overlooking the Bab el-Mandeb is unique, forming a vital chokepoint that links the trade route from the Atlantic Ocean though to the Middle East and Asia, with commercial vessels transporting goods, including oil and gas, between North America, Europe and Asia. The U.S. Energy Information Administration estimated that in 2016, 4.8 million barrels a day of crude oil and petroleum products flowed through the strait.

This strategic chokepoint needs continued security and surveillance to maintain the flow of commerce and prevent illegal activities. One important step to be taken is to reinforce the YCG presence specifically on Perim Island and in Al Mocha port. These are the closest YCG stations to the strait, and it’s necessary to develop YCG surveillance and interdiction capacities in this area.

Redevelopment of the YCG will enable it to retake control of security of Yemeni ports. Before the war this was an important function of the Coast Guard, which was the only organization tasked with this role. Improving the YCG will allow it to achieve standards required by the International Ship and Port Facility Security Code, standards the ports maintained before the war.

Furthermore, reconstruction the YCG’s capabilities, supported by the international community, is essential not only for Yemen but also for the stability and strengthening of maritime security in the region. The YCG is helping to fight terrorism by preventing the movement of suspicious actors by sea, especially from Somalia to the Yemeni coast. The coastal provinces of Al-Mahra and Hadhramaut are used as transit points for most of the smuggling of drugs and hashish, from where it is transported to neighboring countries. This concerns everyone in the region. Moreover, to effectively prevent weapons smuggling, including ballistic missile parts and drones from Iran to its proxies in the region, intensified presence and surveillance by YCG patrol boats is required in the Arabian Sea, Gulf of Aden and southern Red Sea.

Finally, the YCG is a key partner in international maritime alliances, most notably as a member of the Combined Maritime Forces and supporting the U.S. Navy’s 5th Fleet based in Manama, Bahrain. To highlight the latest cooperation, the YCG successfully worked together with the U.S. destroyer Jason Dunham in August 2018 after a large weapon seizure in the Gulf of Aden and captured the smugglers for prosecution in Aden.