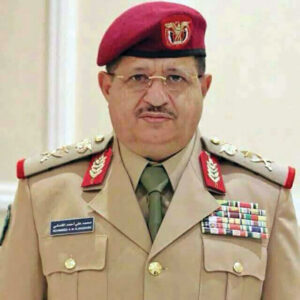 I would like to express thanks and appreciation to U.S. Central Command for dedicating a special issue of Unipath magazine to Yemen and the efforts of the heroes of the Yemeni Armed Forces to restore legitimacy and repel the threat of Houthi aggression with the support of Arab coalition forces. The Armed Forces stand courageously as one with the Yemeni people to fulfill our common destiny of repelling the Iranian-supported Houthis, whose misdeeds extend beyond the borders and geography of Yemen.

The Yemeni leadership is engaged in two simultaneous battles: a battle against the Houthi coup on various fronts and another battle to rebuild the defense establishment on a sound national and scientific basis away from patronage, regionalism and narrow loyalties. We seek to rebuild the military in exceptional circumstances and in record time after the coup plotters seized control of the nation’s capabilities, including the capabilities of the Armed Forces. The military establishment is the guarantor enabling Yemen to confront the Houthis; protect the gains of the revolution and the republic; and confront violence, extremism, terrorism and all subversive schemes aimed at the unity, identity, sovereignty, independence and territorial integrity of the country.

We are working to complete our plans to rebuild the Armed Forces to guarantee the stability of the state, to restore prestige and to eliminate the scourge of rebellion and terrorism, so that the Yemeni Army is strong and cohesive. We care less about the quantity of troops than the quality, so that they are not a threat to our neighbors with whom borders were demarcated, but will contribute to the stability of Yemen and the region.

Yemen’s Armed Forces are a cornerstone for restoring and achieving security and stability in the region, repelling anti-Arab schemes and thwarting attempts to destabilize society, tamper with regional stability and threaten shipping routes and international interests.

The Ministry of Defense and the chief of the general staff inaugurated a training program to rebuild our Armed Forces. The program included the establishment of military institutes and colleges in line with the new federal Yemen, starting with a new military college in the temporary capital of Aden. We are fighting the Iranian-backed Houthis, expanding our victories, demonstrating progress and swiftly improving performance in the various branches, commands, divisions and units as our military has been fighting and training simultaneously.

As you know, Yemen is characterized by difficult terrain and vast territory, and the enemy has buried tens of thousands of anti-personnel and anti-armor mines in a region where there is only one paved road. Since the fighting began, activity on the front has not subsided for one day. Each day of fighting ends with the enemy being depleted. It should not be forgotten that they managed to loot all the resources of the Yemeni military that the republic had been stockpiling in its camps for 58 years. These depots were concentrated in the capital, Sanaa. In addition, Houthis provide financial, military and logistical support to local terrorist forces through major smugglers who have been sneaking weapons and ammunitions into Yemen from notorious states such as Iran.

The Iranian-backed Houthi threat is a concern to everyone. Their crimes have reached beyond the borders and geography of Yemen. We must coordinate and unify our efforts, but these efforts should not be limited to military action. Victory requires a doubling of media efforts, rationalization of discourse and a focus on ending the coup and retaking the homeland. We must ignore the intrigues, rumors and campaigns of defamation and misguidance that serve the rebels.

The media plays a large role in exposing the crimes and violations of the Iranian-backed Houthis. News reports must highlight the clashes, sacrifices and military victories on various fronts, despite the limited capabilities and criminal war of the militias and the systematic incitement by its leaders against the free media and against witnesses to their crimes. We must integrate the military and media fronts.

Peace is a major demand for all Yemenis, and this is what Yemenis are seeking under the leadership of former Field Marshal Abed Rabbo Mansour Hadi, president of the republic and supreme commander of the Armed Forces. We are committed to the directives of the political leadership, and we strive for peace and adherence to international conventions and agreements, past or present.

In conclusion, I want to emphasize our determination and resolution to liberate all Yemeni territory by force and achieve victory over the Houthis and terrorist elements. We are moving toward fulfilling these goals and honoring the blood of our martyrs and wounded, whatever the price. We have no choice but to triumph: Either to live with pride and dignity or to die and receive the badge of martyrdom.