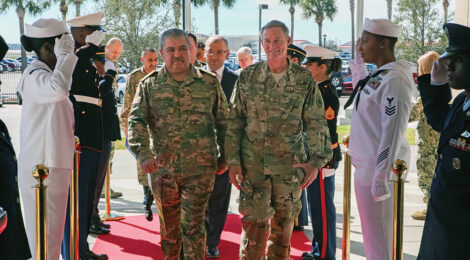 For example, Uzbek troops participated in CENTCOM’s Regional Cooperation exercise in September 2018 with forces from Tajikistan, Afghanistan and Mongolia.

“Uzbekistan is an important partner, and we have a strong military relationship,” said then-CENTCOM Chief of Staff Maj. Gen. Erik Kurilla. “We applaud the country’s support and leadership toward stability and security efforts in the CASA [Central and South Asia] region.”

During the CENTCOM visit, the Uzbek delegation learned about the Joint Strategic Analysis Group and the Coalition Coordination Center.

Although Uzbek Soldiers have trained with the Mississippi National Guard through the U.S.-sponsored National Guard State Partnership Program, Southern Strike was the first time Uzbek special operations forces had joined a military exercise in the U.S.