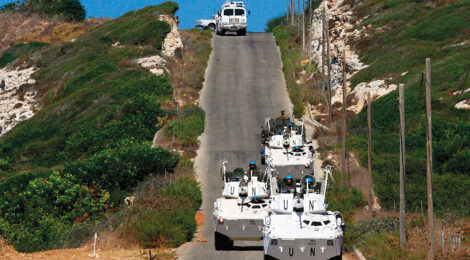 Unipath / April 21, 2020 / Comments Off on UNIFIL and Lebanese Forces Conduct Joint Exercise / Around the Region, Departments

Lebanese troops from the 5th and 7th infantry brigades deployed in the districts of Sour and Marjayoun for the exercise, whereas the 5th Intervention Regiment was positioned in the South Litani region. Italian, Spanish and French troops fanned out in other sectors. UNIFIL Commander Maj. Gen. Stefano Del Col and Lebanese Brig. Gen. Rogeah Al Helou served as exercise directors.

Iron Storm represented close coordination and cooperation between UNIFIL and the Lebanese Armed Forces in their quest to deter aggression. Gen. Del Col promised further exercises to raise troops to the highest level of readiness.

Brig. Gen. Al Helou also commended the joint efforts. “We are learning how to use our weapons rightly and effectively to confront potential enemies,” he said.  Source: Al Jumhurriya