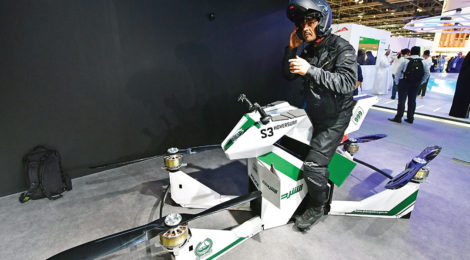 Unipath / July 1, 2019 / Comments Off on UAE tests flying motorcycles / Around the Region, Departments

The United Arab Emirates could be one of the first countries to capture criminals using flying motorcycles that can bypass congested roads by taking to the air.

Called hoverbikes, they are equipped with four drone-like vertical propellers that thrust them as high as 16 feet in the air.

Brig. Gen. Khalid has established the ambitious goal of equipping his force with the new technology by 2020. Two police crews are already training to drive the motorcycles, he told CNN.

Dozens of companies, many in the United States, are competing to develop the first commercially viable electric flying vehicles. Dubai is testing a motorcycle developed by a California company called Hoversurf.

Hoversurf’s prototype weighs about 250 pounds and moves as fast as 60 miles per hour. One drawback is its driving range — current battery technology ensures an electric charge lasts only 10-20 minutes.

Until range improves, Dubai police would need to make their arrests in a hurry. Source: CNN