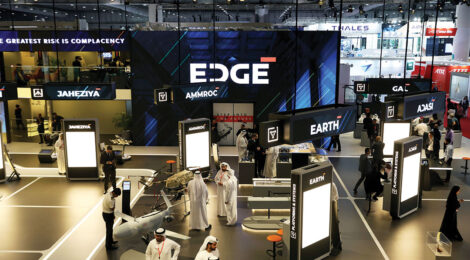 Since starting in the 1970s with a few thousand Soldiers possessing basic military skills, the United Arab Emirates (UAE) Armed Forces has grown into a well-equipped military of 63,000 in 2020.

But the country’s leaders have even greater ambitions: to make the Emirates a global leader in the production of advanced weaponry in fields such as cyber defense, missiles and jet propulsion.

“The solution to address hybrid warfare lies at the convergence of innovations from the commercial world and the military industry. Established with a core mandate to disrupt an antiquated military industry generally stifled by red tape, Edge is set to bring products to market faster and at lower prices,” Edge Chief Executive Officer Faisal Al Bannai said.

Edge will absorb EDIC and include companies such as armored military vehicle manufacturer Nimr, Abu Dhabi Shipbuilding, and the Advanced Military Maintenance Repair and Overhaul Center, a joint venture between the UAE government and U.S. defense contractor Lockheed Martin.

The conglomerate will manage five technology clusters under the headings of platforms and systems, missiles and weapons, cyber defense, electronic warfare and intelligence, and mission support.  Sources: al-ain.com, iiss.org, alarab.co.uk/

← A Partner for Peace in Qatar
Jordan Merges Security Agencies →