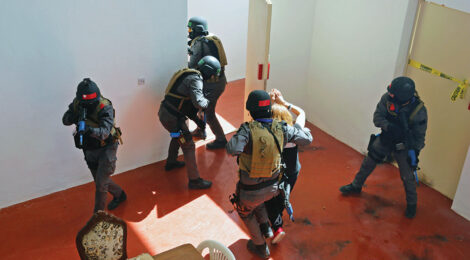 Unipath / October 21, 2020 / Comments Off on Jordan Merges Security Agencies / Around the Region, Departments

The king urged Jordanian Prime Minister Dr. Omar Razzaz to complete the necessary legal and administrative work to achieve the merger, which will streamline the country’s efforts to ensure the safety of its growing population.

In a letter to the prime minister, the king cited the need to stretch the nation’s budget and enhance the performance of security agencies to serve the citizenry. To lead the merged agencies, Maj. Gen. Hussein Mohammed Al-Hawatmeh — up to December 2019 the head of Jordan’s Gendarmerie Directorate — was appointed the country’s first director general of public security.

The general received a message from the king expressing “pride, appreciation and trust in you and thanks for your tireless efforts and sincere sacrifices to serve citizens and preserve security for them and for our homeland.”

The Jordanian government views consolidating services as a way to meet the needs of a population that grew to more than 10.5 million in 2019, from less than 10 million a year earlier. Large numbers of refugees living in Jordan from neighbors such as Syria have strained the country’s finances even further.
Sources: alghad.com, elaph.com, royanews.tv