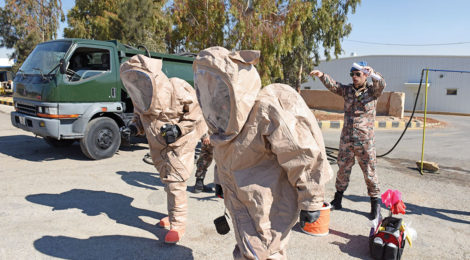 Unipath / May 21, 2019 / Comments Off on Jordan guards against WMD / Around the Region, Departments

Jordan has successfully trained 750 Soldiers and civilians to respond to potential chemical, biological, radiological, nuclear and high-yield explosives attacks. Soldiers and emergency workers have received years of training in mass casualty decontamination operations, most recently in cooperation with a mobile training team staffed by the Colorado Army National Guard from the United States.

The Colorado team developed curriculum for 22 courses, training scenarios and a joint military-civilian exercise that engaged more than 30 students from Jordan. Instructors relied on Arabic translators, and training materials appeared in Arabic as well as English. Many students came from the Jordan Armed Forces-Arab Army Chemical Support Unit and the Jordanian Civil Defense Directorate.

“This has been by far the most important mission of my military career,” U.S. Army Sgt. 1st Class Stephen Russ said in June 2018.
“The lessons I have learned will
stay with me for the rest of my life.”

The growing Jordanian proficiency in countering WMD led to the opening of a Center of Excellence in Jordan.

“The support we have received from our American partners has been great,” Jordanian Lt. Col. Mirza Hatoqay said.

For the past 25 years, the U.S. National Guard has sponsored the State Partnership Program, which pairs state National Guard units with military units in other countries. The program includes 75 partnerships with 81 nations.