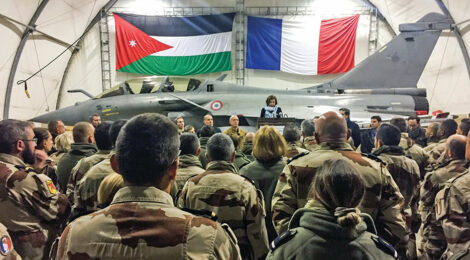 Unipath / October 7, 2019 / Comments Off on Jordan, France Commit to Cooperation / Around the Region, Departments

Another topic was the continuing efforts by the global coalition to eradicate Daesh despite the terror group’s territorial losses in Iraq and Syria.

“Jordan was one of the first countries to partake in the global coalition to counter the terrorist gangs in Iraq and Syria and safeguard our borders and citizens against the threat posed by terrorist organizations,” Prime Minister Razzaz said.

Parly reaffirmed France’s role in the fight against violent extremism and praised Jordan’s role in not only fighting terrorists, but also providing refuge and humanitarian aid to victims of the Syrian civil war.