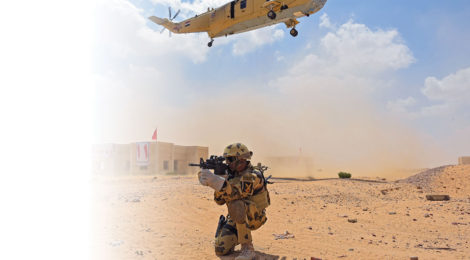 As the ramps of armored vehicles drop, Soldiers pour into the Egyptian desert and take a position on the battlefield. Movements are sharp and decisive as troops assemble and expertly destroy enemy targets. Firepower from F-16s and Apache helicopters flown by Egyptian and Greek pilots have already weakened the terrorists, paving the way for the ground forces assault.

The combined training events, considered to be among the largest in the region, provided forces with theoretical and practical experience during command post and field training exercises. The focus was to improve regional security and military cooperation and promote interoperability when engaging in irregular warfare.

Maj. Gen. Nasser Al-Assi, director of the Training Authority for the Egyptian Armed Forces, expressed pride in the growth of the exercise between 2017 and 2018.

“Bright Star training is a vivid embodiment of the friendship and cooperative relations between the Egyptian and U.S. armed forces, which contributes to strengthening the bonds of cooperation and mutual interest to counter terrorism, maintain international peace and security, and unify concepts and the exchange of combat experience of the participating countries.”

Exercise objectives focused on giving multinational forces experiences to overcome these types of real world threats. For example, Soldiers from different countries conducted a joint mission to clear a village of terrorists with an emphasis on protecting civilians trapped there.

The exercise also included joint air defense and aerial combat training by air force elements to defend and attack vital targets and refuel in the air, as well as provide air support to ground forces.

The first Bright Star exercise was held in the 1980s. The exercise continues to build the strategic security relationship between Egypt and the U.S., a historic partnership that both countries embrace to address common security threats. The 2017 exercise was bilateral between Egypt and the U.S., but both countries ensured that the 2018 events included more countries and challenged participants with scenarios relevant to today’s security environment.

Gen. Votel praised the exercise and the preparations the host country made to ensure it was successful and beneficial for all forces. Lt. Gen. Michael Garrett, then commander of U.S. Army Central, also visited the Joint Training Command Center and War Games Center, where the multinational air and navy command centers were located, as well as the site of the command post exercise.

For the second year in a row, Bright Star included a seminar for senior leaders to share and discuss best practices related to fighting international terrorism and illegal immigration.

The final phase of the exercise was the field training portion, where multimission fighter aircraft carried out reconnaissance missions and aerial bombing against terrorists and enemy convoys.

Col. Nasser bin Hatlin al-Suhaimi, commanding officer of the Saudi forces participating in Bright Star, led teams of paratroopers, special security force units, and observers from ground, air and naval forces. The Saudi Ministry of Defense is focused on building capabilities through participation in such exercises to increase the combat readiness of Saudi forces, he said.

Bright Star 2018 highlighted the military skills of participating forces. Armed anti-tank helicopters destroyed hostile targets and carried out advanced attacks against terrorist groups. Meanwhile, mechanized and armored detachments from Egypt, Jordan and the U.S. were dispatched to complete the mission and destroy all enemy targets.

Jordan Armed Forces Col. Nizar Soub, commander of Jordanian forces at the exercise, extolled the strategic value of international maneuvers like Bright Star. Forces from Jordan and other countries trained to overcome asymmetric threats, such as clearing terrorist strongholds or securing villages from terrorist attacks. Troops also focused on more conventional military tasks such as border control and maritime security.

Leaders anticipate that Bright Star 2020 will be even more successful. Nasser Military Academy Military Advisor Maj. Gen. Hisham Al Halabi said: “We are looking at maneuvers that began big and strong and which have continued to grow in terms of the numbers of participants, the types of training exercises and the kinds of arms and training programs used.

“Egypt has equipped the Mohammed Naguib Base with state-of-the-art facilities,” he added. “It has outstanding capacities for coordinating between and hosting a large number of participants from different branches of other countries’ military forces.”

The training represents a continuation of the development and strengthening of military relations between Egypt and many Arab and foreign countries. Egyptian military leaders are keen to develop the skills of commanders and officers to maintain combat efficiency and standardize operational concepts with friendly countries.

U.S. Maj. Gen. Jon Mott, U.S. Central Command director of exercises and training, said he was grateful for this opportunity to come together to focus not only on common interests of regional security and defeating extremist organizations, but also to reaffirm mutual respect and collective friendship.

“We are all stronger as a team, and we cannot do the work we do without our partners,” Maj. Gen. Mott said.

He continued: “The Egyptians are such gracious hosts, and we have the opportunity to come here and enjoy and learn from their culture, experiences and geography. The world is getting to be a tough neighborhood everywhere. …  No matter where the terrorists are, we are going to be there working together to fight them — whether it’s in the Middle East, whether it’s in Europe or back in the U.S. We need to be able to fight together because the threats are not going away any time soon.”

Sources: Information from The Jordan Times and Asharq Al-Awsat was used in this report.

I would like to point out that due to the successes of the 2017 Bright Star training, the training activities have been expanded with an increase in the number of countries participating to include the United States and Egypt along with military units from Greece, Britain, Jordan, the United Arab Emirates, Italy, France and other countries as observers. The training included combating terrorism, unconventional military drills using live ammunition, as well as various activities of the naval and air forces that participated in 2018, reflecting the importance of training at Bright Star and making it one of the largest military exercises in the Middle East. 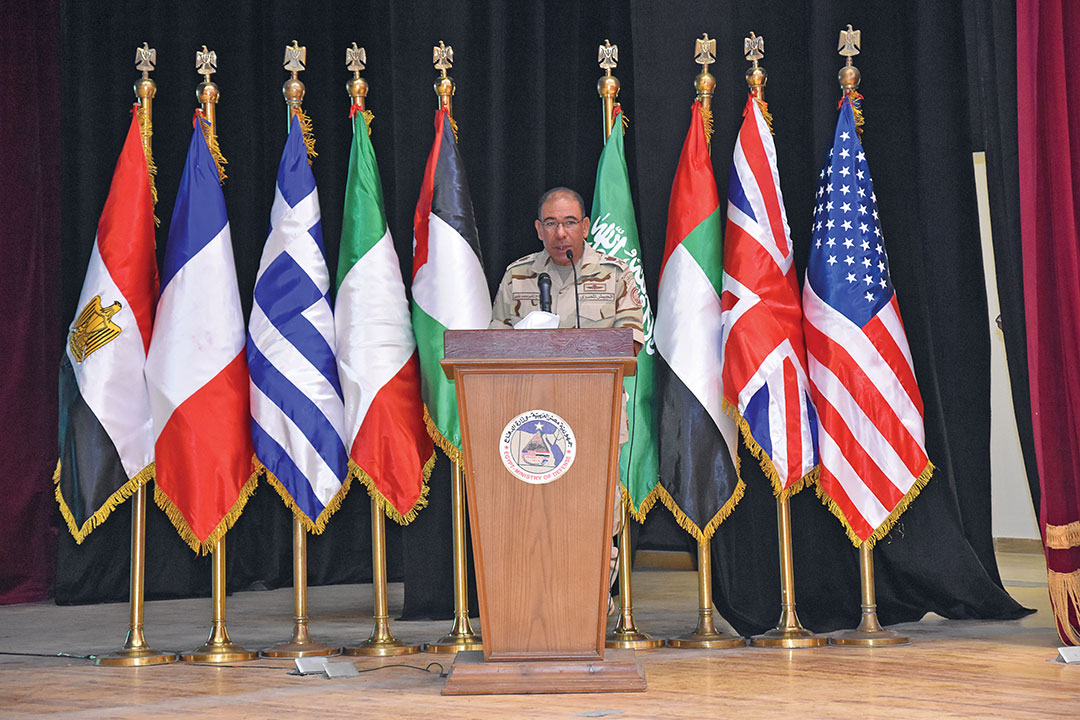 Bright Star exercises have been the leading engagement between U.S. and Egyptian armed forces. Both nations have agreed to exchange leadership and training experiences and conduct joint training. The Bright Star exercise began in 1981 between the United States and Egypt and continued till 2009. The maneuvers were conducted every two years, but were suspended once in 2003, and a second time in 2011 after the January 25 revolution. It resumed in 2017, and this year the Bright Star 2018 training was expanded to include forces from nine countries, and 16 countries were invited as observers. We hope the Bright Star exercise will continue through the coming years.

I would like to offer my sincere appreciation to all military forces that participated in this training and convey the thanks of our leadership in Egypt and the General Command of the Egyptian Armed Forces, and we welcome them at any time to the land of Egypt, as we reaffirm our support of the cooperative military ties with all brotherly and friendly countries.

Bright Star was held primarily at the Mohammed Naguib Military Base, the largest such complex in the Middle East and Africa. The base is in Egypt’s Northern Military Zone, a region overseen by Maj. Gen. Ali Adel Ashmawy. He was proud of his country’s role in planning and executing the exercise — a continuation of Egypt’s legacy of military strength.

“Egypt has an army that defends and protects. Egypt will always be at the forefront of the strongest world armies,” Maj. Gen. Ali told Unipath.

He deemed it an honor for Egypt to cooperate with the United States, which in his view possesses the strongest army in the world. Joining the U.S. military with Egypt’s — the most ancient organized military force in history — is mutually beneficial and strategically important, he explained. 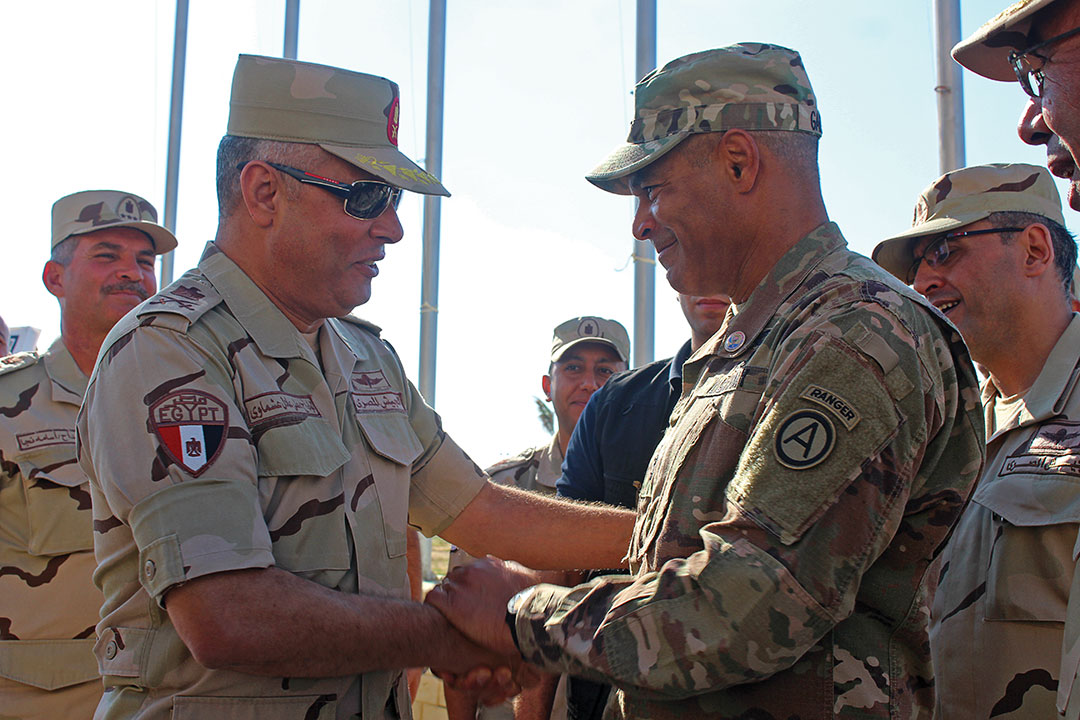 Learning from one another and understanding each other’s military processes and capabilities was one of many goals of Bright Star. “When Egypt’s military doctrine is united with the United States’ military doctrine to protect security and border control of these countries, I believe this benefits all individuals, officers and Soldiers in both armies,” he said.

Among the many highlights of the Bright Star 2018 exercise, two important accomplishments stood out for Maj. Gen. Ali: the successful live ammunition portion of the field training exercise and the capture of a terrorist outpost. He also vouched for the importance of the command post exercise and the senior leader seminar.

“I would like to give my thanks, appreciation and respect to all Egyptian forces and troops, officers and Soldiers who participated in this training,” Maj. Gen. Ali said. 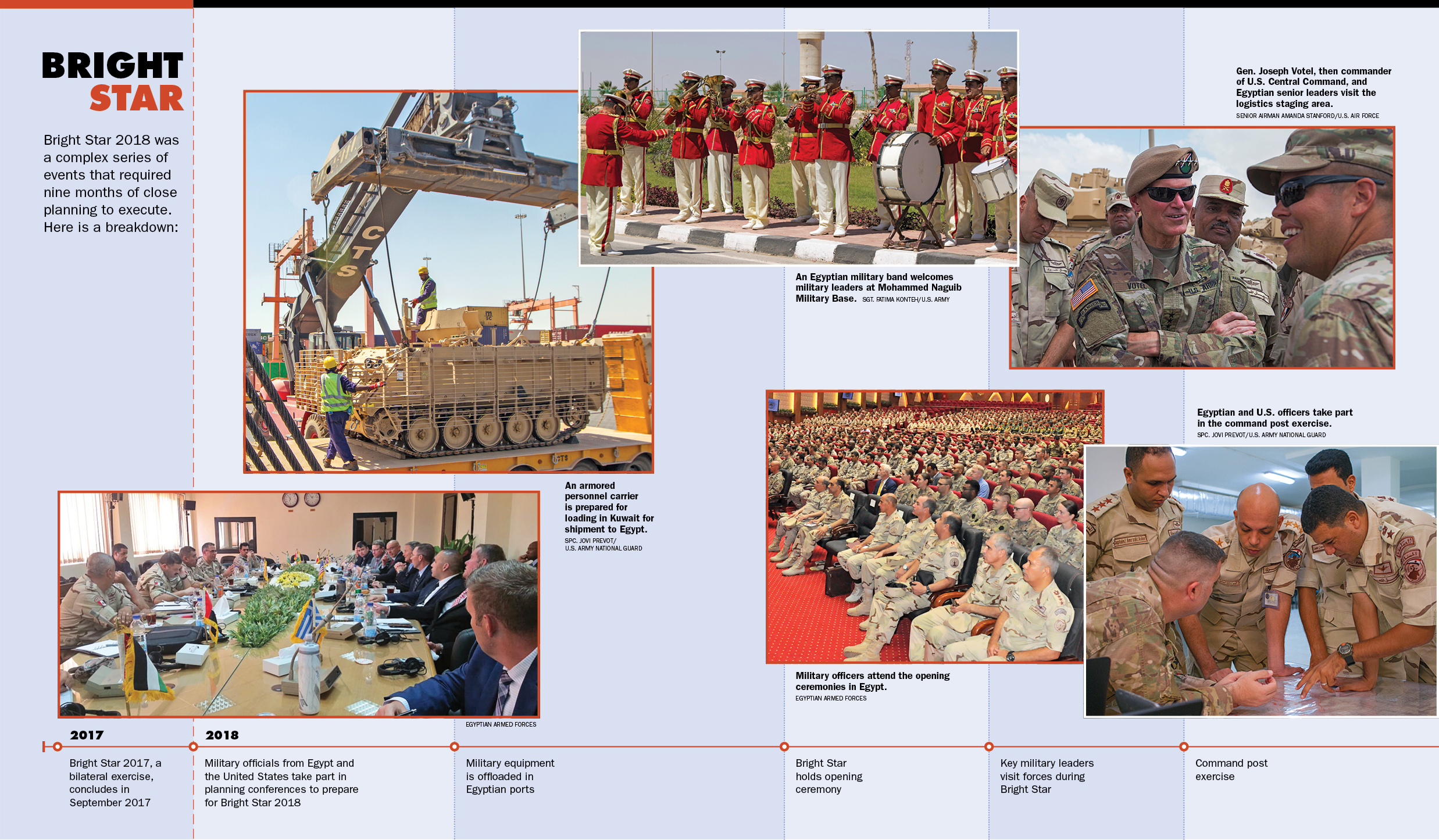 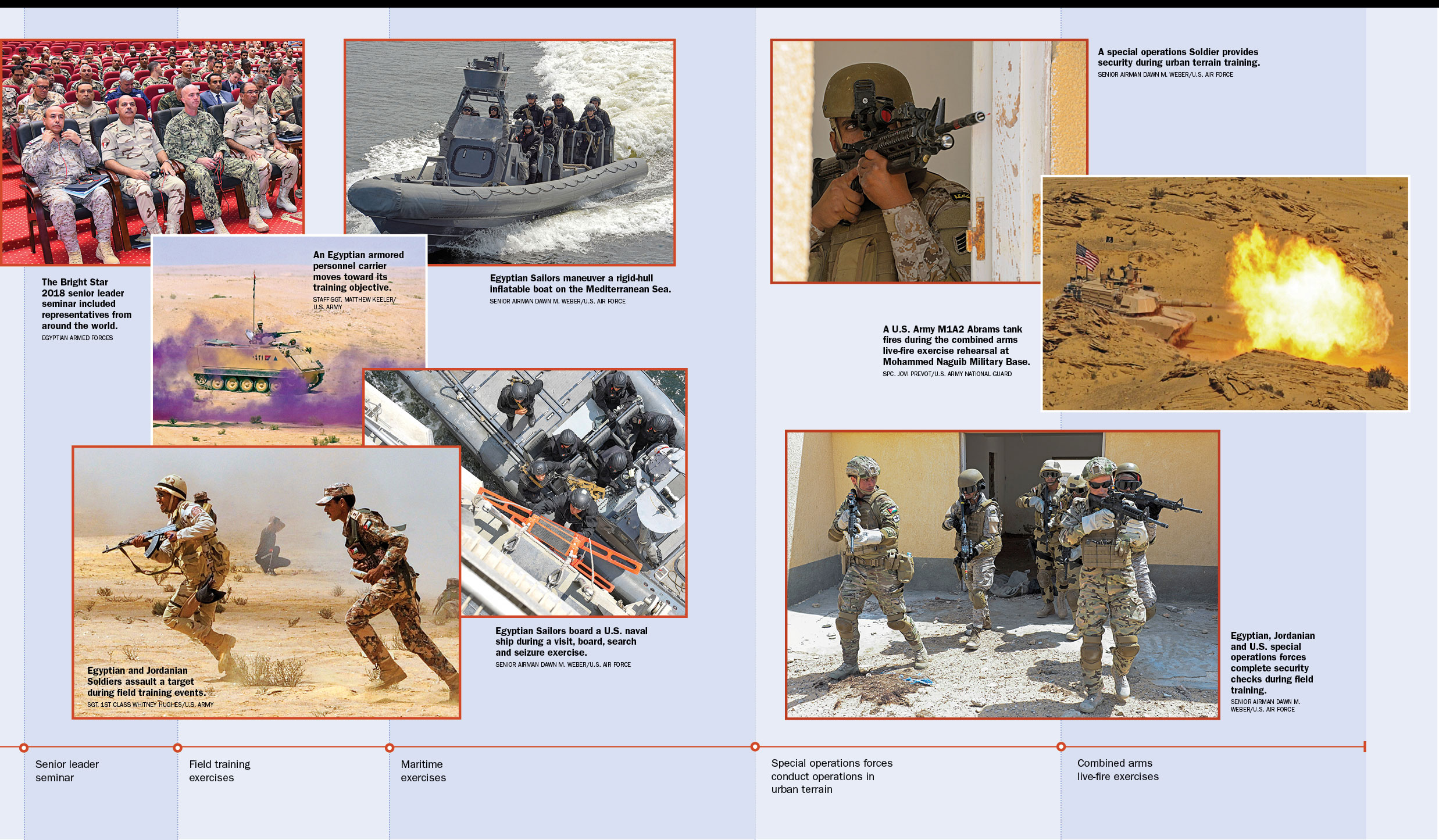