“Kuwait, My Country, may you be safe and glorious! May you always enjoy good fortune. Blessed be my Country, a homeland for harmony, and may you ever stand defended by free countrymen who have built our noble life with the most generous hands.”

This is how the Kuwaiti national anthem glorifies the homeland and its protectors who devote themselves to serve and defend it. In this edition, Unipath interviewed one of Kuwait’s leaders who translates love of homeland into deeds and achievements with the support and determination of his heroic Soldiers. He is Chief of the General Staff of the Kuwait Armed Forces Lt. Gen. Mohammed Al-Khadher.

Unipath: Kuwait is an important regional model of stability and security. What strategies and policies have led to Kuwait’s success?

Lt. Gen. Al-Khadher: The state of Kuwait has always been a hub for peace and humanity, and the security of the state is imperative. We as Kuwaitis understand the significance of unity, democracy and freedom, which are the main factors for our homeland’s security and stability. The wisdom of His Highness Emir Sheikh Sabah Al-Ahmed Al-Sabah has always protected the state from continuous threats and challenges, providing diplomatic efforts to solve any rifts among neighboring states.

Furthermore, Kuwaiti politics have been guided since 1962 by a unique Constitution — a contract between the ruler and the people stating that we are a democratic state and sovereign nation tolerant of freedom and different religions. In addition, the stability of the state has depended heavily on a united internal front (patriotism) that Kuwait has developed among its diverse population and in the Armed Forces and the State internal security apparatuses, defending it from threats that have occurred throughout the years. The military focuses on training its forces and keeping them at the highest level of readiness at all times. To help do so, the Armed Forces has focused on purchasing highly developed weaponry and its latest upgrades to increase the capability of our troops on land, in the air and on the sea and in domestic security operations.

The continuous threat instigated by terrorists and their proxies has alerted the state of Kuwait. It is our number one threat, and we are determined to counter it. There is coordination at the highest levels among the Armed Forces, police and National Guard, in a mutual effort to continuously protect our land night and day.

Unipath: Kuwait cooperates with many militaries around the region and the world. Why is this cooperation important for Kuwait?

Lt. Gen. Al-Khadher: Military cooperation is vital for states in the 21st century. The Kuwaiti military works daily with regional and international military partners to facilitate assistance and maintain continuous cooperation at all three levels — tactical, operational and strategic — filtered through defense and security agreements.

Kuwait’s military cooperation is facilitated mostly through the areas of training and exchange programs, bilateral and multilateral exercises, humanitarian aid and supporting the international community in combating global threats. The aim of this cooperation is to maintain the security of Kuwait and allied states from the 21st century scourge known as terrorism that has infiltrated our societies and knows no borders for its expansion. Our goal is to communicate and work hand in hand with our allies to counter terrorism and the potential threats targeting our nation, in addition to improving professional military training and expertise for the Armed Forces in all its sectors.

Unipath: What military exercises or training in Kuwait have contributed to the professionalism and skills of Kuwait’s Armed Forces?

Lt. Gen. Al-Khadher: The Kuwaiti military trains throughout the year without rest or pause, focusing on raising combat readiness of the troops and fostering skills gained from hard work. These training and exercises have contributed positively to the Armed Forces, mainly the ones hosted by Kuwait, such as Eagle Resolve, Pearl of the West, Desert Shield and Peninsula Shield. The target of mutual training and exercises is gaining experience, mutual understanding of how partners operate and developing at three levels: strategic, operational and tactical. We are looking forward to continuous cooperation and interoperability with other states at all levels, be it training in or out of Kuwait.

Unipath: What are the biggest threats to regional and international security, and what is Kuwait doing to prepare for them?

Lt. Gen. Al-Khadher: The world is confronting several types of threats, yet the international community places terrorism at the top of its list. This transnational disease has developed from one century to another. While it changes its shape and form, it maintains the same content of violence and brutality that undermines the security of our society and threatens the state’s assets and the lives of innocent people. We have to differentiate between terrorism in all its forms and separate it from true Islam. Furthermore, terrorism has made the Kuwaiti population united under His Highness the Emir’s leadership. “We are armed with Islamic values, solidarity and nationalism. This is Kuwaiti society — strong, united and patriotic. We are prepared and ready for any threats to our country. We have set the standards for mutual training and exercises that focus heavily on national security, aiming to serve Kuwait and its population against any threats, including fanatical deviant ideology.

Unipath: What advice can you offer to young military officers?

Lt. Gen. Al-Khadher: My advice to the younger generation is to appreciate the blessings of security and stability that Kuwait maintains despite its location in a very turbulent region. I am confident that as young leaders they are capable of protecting Kuwait. With their deep sense of patriotism and top notch training, they will take us to the next level with confidence. Furthermore, they must always maintain the high ground with regard to combat readiness, continue their training, update their subordinates with the latest in technology and developments, and, most important, arm themselves with knowledge necessary to achieve their goals. These will always be keys toward success. Finally, as Kuwaitis we need to learn from what’s happening around us, and here the younger generation plays a role in backing the country’s leadership at all times, because leaders will need their support to overcome any crisis the state faces.

Unipath: Are the Armed Forces ready for Kuwait’s 2035 vision?

Lt. Gen. Al-Khadher: Based on direct instructions from His Highness the Emir, and by direct supervision from his excellency the minister of defense, we have set a road map that contributes directly to the 2035 vision. I can break down our plan into three main phases: First, we are planning to upgrade our defense systems, cyber security and hi-tech technology on land, in the air and on the seas. Secondly, we are looking forward to recruit Kuwaiti youth and invest and develop their potential in the military arena. This phase has been planned carefully by our finest specialist leaders and strategic planners. Our main objective, as a threshold for that vision, is to secure a Kuwaiti generation armed with knowledge and high quality of training to make them capable of securing and protecting future investments attracted by the 2035 vision and ensuring their sustainability. Finally, we will combine the efforts of system integration and recruitment, in the scope of training and exercises to meet our vision of an upgraded defense system. We are looking forward to training small units and assimilating them within the main commands to fill gaps. This will achieve our main goal of strengthening the bonds between the Armed Forces on the national and international levels. 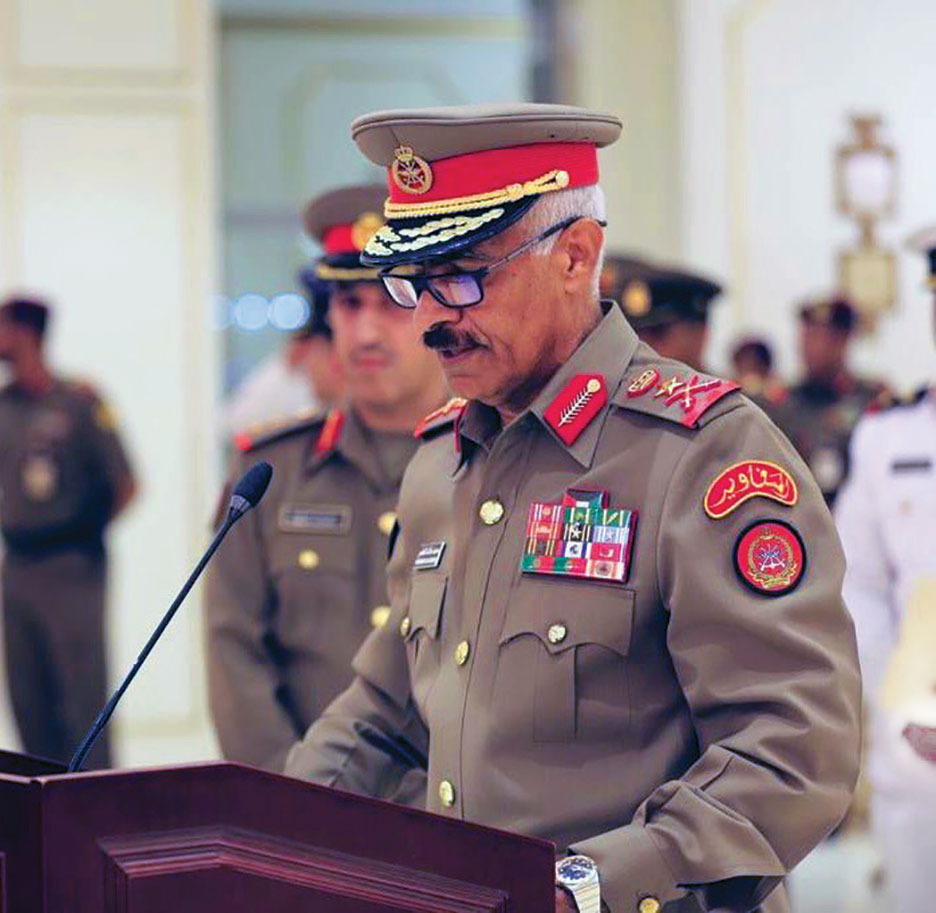 The Road ahead Kuwait’s 2035 vision

Upgrade our defense systems, cyber security and hi-tech technology on land, in the air and on the seas.

Recruit Kuwaiti youth and invest and develop their potential in the military arena. This phase has been planned carefully by our finest specialist leaders and strategic planners. Our main objective, as a threshold for that vision, is to secure a Kuwaiti generation armed with knowledge and high quality of training to make them capable of securing and protecting future investments attracted by the 2035 vision and ensuring their sustainability.

Combine the efforts of system integration and recruitment in the scope of training and exercises to meet our vision of an upgraded defense system. We are looking forward to training small units and assimilating them within the main commands to fill gaps. This will achieve our main goal of strengthening the bonds between the Armed Forces on the national and international levels.

Qatar Leads in Safety and Security