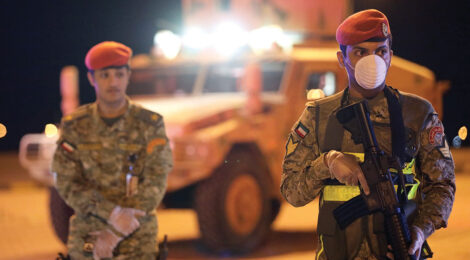 Such engagements — which entail decontamination, the use of personal protection equipment, sterilization and isolation of casualties — turned out to be timely with the arrival of the COVID-19 pandemic in the spring of 2020.

In places like Kuwait, Oman, Bahrain, Qatar, Jordan, Lebanon, Egypt, Saudi Arabia and the United Arab Emirates, military units were deployed to supplement the work of civilian agencies in suppressing the spread of the virus.

For example, Jordanian troops who trained in 2019 with CENTCOM and the U.S. Defense Threat Reduction Agency played a key role in coordinating that country’s COVID-19 response.

Likewise, the Lebanese Armed Forces Weapons of Mass Destruction (WMD) Company has received several million dollars in significant training and material assistance from the United States that enabled it to support the country’s efforts to control the virus.

In Kuwait, U.S. Army Central has completed 12 informational exchanges with the Kuwait Army’s Defense Command since 2017. This information sharing contributed to the development of decontamination procedures used to stem the spread of the COVID.

Omani and U.S. forces had just completed a counter-WMD exercise in March 2020 when the pandemic struck. That hands-on knowledge was put to immediate use in the anti-COVID campaign in Oman.

Egyptian Armed Forces made their Chemical Warfare Department forces available for COVID decontamination efforts at Cairo’s various universities as well as government buildings. They played a key role in the initial response to the pandemic.

CENTCOM’s Partner Nation Capacity Branch spends more than half a million dollars each year conducting exchanges with regional partners. It does so in coordination with U.S. civilian agencies that specialize in curtailing the threat of WMD. Topics include CBRN passive defense, medical countermeasures, consequence management and WMD border security to counter proliferation of WMD.

Considering the COVID crisis and the popularity of such training in the Arabian Gulf and Levant, CENTCOM commanders expect demand for counter-WMD programs to grow.