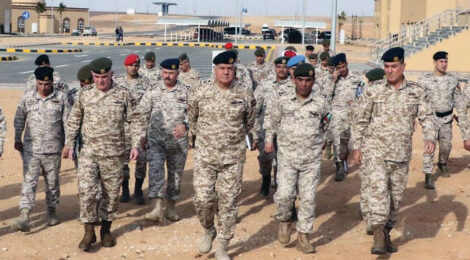 Unipath / January 4, 2021 / Comments Off on Military Training City Established in Jordan / Around the Region, Departments

The Jordan Armed Forces opened the Sheikh Mohammed bin Zayed Al Nahyan Training City near Zarqa, paid for a with a generous donation by the United Arab Emirates (UAE).

By naming the training city after the crown prince of Abu Dhabi and deputy supreme commander of the UAE Armed Forces, Jordan also honored one of its top allies in the region.

The purpose of the facility is to centralize training for every branch of the Jordan Armed Forces in one large complex. His Royal Highness Crown Prince Al Hussein ibn Abdullah II of Jordan officially dedicated the complex in March 2020.

Some schools were still under construction at the time of the grand opening in March: the Royal Armored Force School, the Martyr King Abdullah ibn Al Hussein Infantry School, the Royal Artillery Branch School, and the Language Institute.

“The establishment of the training city is a culmination of the historical relationship between the leadership of the two countries, the United Arab Emirates and the Hashemite Kingdom of Jordan,” training city Director Brig. Gen. Hikmat Al-Qadi said.  Sources: Al Khaleej, The National