When I assumed command of Combined Task Force 152 (CTF 152) in February 2019, little did I know that my tenure would be among the most momentous in the history of the multinational naval coalition.

As a Kuwait Coast Guard officer, I was proud to represent my country in defending the Arabian Gulf from terrorists, criminals and other malign actors. CTF 152 — part of Combined Maritime Forces (CMF) based in Bahrain — consists of some of the world’s best naval staff, ships and maritime reconnaissance aircraft.

Thorough preparation played a large role in the Coast Guard’s demonstrated competence commanding CTF 152. The Kuwait Coast Guard joined CMF in 2010, and membership has provided the seeds for many fruitful achievements.

Officers attended some of the best naval and coast guard academies in the world and developed expertise in conducting maritime security operations in Kuwait’s territorial waters and exclusive economic zone. Another factor in Kuwait’s success was a preparatory course for officers — we received ample time to prepare for the handover of CTF 152.

Support and mentorship provided by U.S. Navy Vice Adm. James Malloy — then commander of Naval Forces Central Command, the U.S. Fifth Fleet and CMF — was a big factor in the success we achieved during our tenure. We worked together to keep Gulf Cooperation Council (GCC) ships at sea, cooperation that continued despite a diplomatic dispute involving Saudi Arabia, the United Arab Emirates (UAE), Bahrain and Qatar.

The most prominent of these achievements was conducting large joint patrols to reduce tensions in the Arabian Gulf and address increased malign activity that has destabilized the free flow of commercial shipping in and out of the Arabian Gulf.

This operation involved ships and boats from the navies and coast guards of the United States, the United Kingdom, France, the GCC countries and Iraq. It climaxed with the largest and most sustainable joint patrol operation in the history of the Arabian Gulf from May 18 to August 29, 2019. Since implementation in mid-2019, more than 60 ships and boats have joined these enhanced patrols.

A significant factor in the success of the joint patrols was the confidence placed in the Kuwait Coast Guard’s leadership by GCC Naval Forces and Coast Guard commanders. Specifically, that meant a continuous contribution of ships, boats and personnel to secure the waters of the Arabian Gulf.

The Kuwait Coast Guard’s command of CTF 152 gave it a greater grasp of maritime security; the Coast Guard is technically a law enforcement agency under the Ministry of Interior and not a traditional naval force.

When I assumed command of the task force, my goal was to continue building the naval capabilities of GCC countries and CTF 152. This included increasing maritime efficiency and nurturing a spirit of mutual cooperation. Furthermore, embracing maritime domain awareness allowed us to detect and analyze a wide range of threats in the marine environment.

We were able to promote capacity building between the GCC countries and CTF 152 through joint courses and exercises. We improved maritime security by linking the operation centers of the navies and coast guards of the GCC with that of CTF 152.

Additionally, we hosted two conferences that facilitated discussions on maritime challenges in the Arabian Gulf. One included the issue of Somali charcoal smuggling and narcotics smuggling. The next raised GCC awareness about the need to successfully prosecute these crimes committed on the seas. 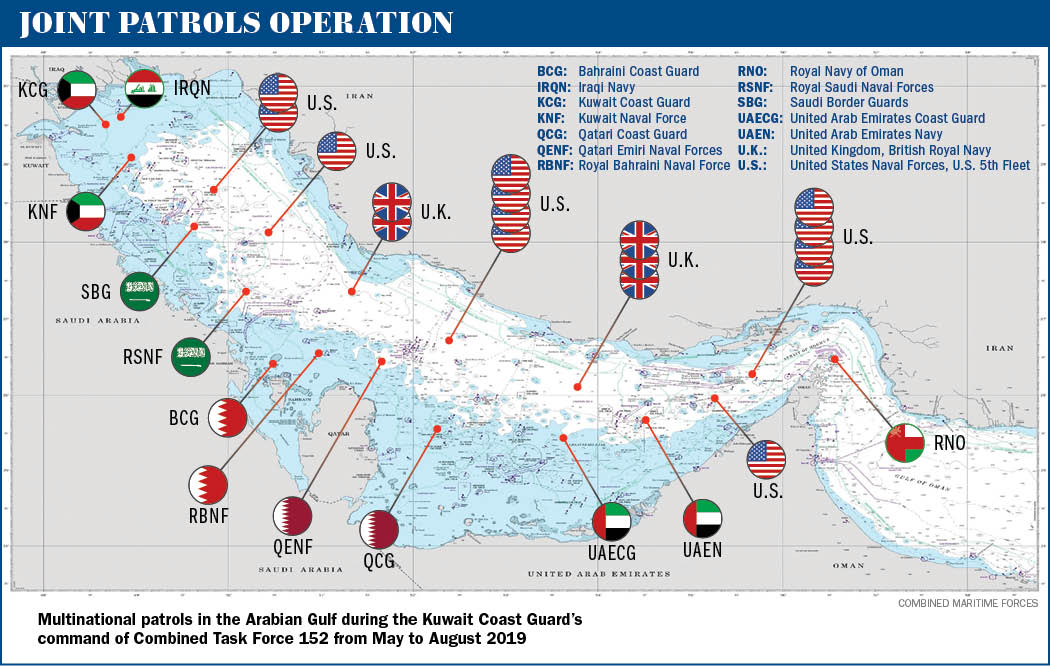 Our command of the task force demonstrated the will and solidarity of the participating forces while highlighting the regional, international and strategic importance of CTF 152.

During Kuwait’s leadership of CTF 152 in 2019, it experienced a series of menacing maritime events. Although some viewed it as a challenge, I considered it an opportunity:

On May 12, four commercial ships anchored in the outer harbor of Fujairah, UAE, were subjected to sabotage operations.

On June 20, Iran’s Islamic Revolution Guard Corps (IRGC) shot down a U.S. military surveillance drone over international waters in the Strait of Hormuz.

On July 19, the IRGC detained the tanker Stena Impero in the Strait of Hormuz.

The Threat of Unmanned Aerial Systems

Partners in a Crisis