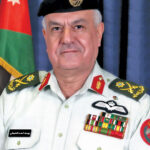 I am pleased to accept the kind invitation from Unipath magazine, published by United States Central Command and specializing in security and military matters, to write this issue’s editorial. The topic I wanted to discuss is the role of the Jordanian government, in partnership with the Armed Forces, in responding to the coronavirus pandemic and the need for cooperation among brotherly and allied armies to confront this pandemic and establish local and regional security and stability.

From day one of the spread of coronavirus in the Chinese region of Wuhan, the Jordan Armed Forces, in partnership with the government and official agencies, have sought to monitor the situation, establish strategic planning at the state level and plan and coordinate at the highest levels to respond to this pandemic. At the end of January, the government swiftly evacuated dozens of Jordanian students residing in Wuhan, in addition to evacuating some students from fellow Arab countries.

The government took this proactive step under the direct guidance of His Majesty King Abdullah II ibn Al Hussein (may God bless him). This demonstrates the forward planning, seriousness and awareness of government and official agencies in dealing with this outbreak.

On March 15, His Majesty the King returned to the country and has worked tirelessly, overseeing a meeting of the National Center for Security and Crisis Management, which addressed the need to combine national efforts toward combating this pandemic. His Majesty ordered the formation of a crisis management operations cell, headed by the Armed Forces in coordination and consultation with the competent governmental agencies, to deal with the crisis, preserve national security and protect the health and rights of citizens and residents in the kingdom.

The formation of the crisis management cell was a proactive step to combat this pandemic. The cell fulfills its duties at the strategic and operational levels by implementing a system of continuous coordination among representatives from ministries and official institutions. The aim was to overcome difficulties citizens faced without impacting the plan and the decisions taken to restrict the spread of the virus.

Jordan’s Defense Law came into force, and from it emerged several orders to control the spread of the outbreak. In accordance with the defense orders, a plan to deploy the Armed Forces and security personnel in all governorates, towns, villages and neighborhoods of the kingdom was activated. First and foremost, this deployment was designed to assist and protect citizens and to support the actions of the state in controlling the outbreak and limiting its spread by empowering medical staff and epidemiological surveillance teams to conduct their work.

From the moment the Defense Law came into force, we bet that Jordanian citizens would discern the need for such actions. Thankfully, we did not lose that bet. Awareness among the citizens, their total trust in His Majesty’s wise leadership and their love for and pride in our Armed Forces and security services increased coordination and synergy and contributed to limiting the spread of the disease.

All this was preceded by the General Command of the Jordan Armed Forces’ implementing a restructuring program of its units and formations in mid-2018 to ensure their capability to confront any threat to Jordan’s stability and security within the scope of available resources. It also ensured the ability to work alongside allies and partners from fraternal, friendly nations, in addition to modernizing, strengthening and developing military and technological capabilities to keep pace with modern times.

Restructuring the Armed Forces, which are a major pillar of national security, has made them capable of responding to changes, of adapting to new developments and of cultivating necessary tools and methods to continue conducting their sacred mission of preserving the sanctity and stability of the kingdom. Perhaps the effectiveness and feasibility of the restructuring is best demonstrated by how well the Armed Forces coped with the coronavirus crisis through continuous cooperation and coordination with government agencies and security apparatuses.

The Armed Forces continue to fulfill their duty in securing the borders from extremist terrorist groups and building and developing partnerships with allied, friendly countries to expand regional security and stability, through the exchange of intelligence and participation in international exercises, which enhance and increase the expertise of our Soldiers working within a joint operational environment.

In coordination with U.S. forces, we held the second annual International Counter-Extremism Conference titled “Intellectual Security.” This was attended by 72 friendly nations to reject all forms of intellectual extremism and terrorism that impair the lives of individuals, communities and nations.

From day one, the Armed Forces have recognized the danger of intellectual extremism and terrorism to state and society. Therefore, it established the Military Center for Counterterrorism and Extremism, which awards a master’s degree in counterextremism and counterterrorism strategy.

In conclusion, I would like to thank our allies and friends from many nations for their continued support in defeating this global pandemic. I would also like to thank Jordan’s Armed Forces, security services, institutions and government agencies for their tremendous efforts in dealing with the coronavirus crisis to preserve the lives and safety of the kingdom’s citizens and residents.

Chairman of the Joint Chiefs of Staff

The Value of Combined Maritime Forces