Lt. Gen. Hashim Al-Rifai has distinguished himself in improving the Kuwait National Guard 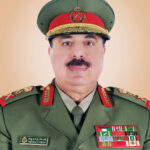 Unipath welcomes a distinguished leader who serves as the undersecretary of the Kuwait National Guard. Lt. Gen. Hashim Al-Rifai is keen to enhance the role of this institution to become the primary support group for the country’s military and civilian institutions. The National Guard has multiple roles and is honored to safeguard national security in cooperation with the military, police and other agencies. Appreciation for Lt. Gen. Al-Rifai’s forces came from none other than His Highness Emir Sheikh Sabah Al-Ahmad Al-Jaber Al-Sabah, who described the National Guard as “one of the key pillars which the security and defense of the nation depends on” and praised its “honorable duty in preserving and maintaining the security and stability of this beloved nation in cooperation with your brothers in the military and the police, which is appreciated and cherished by all.”

Unipath: As commander of the Kuwait National Guard, please describe its duties and responsibilities in the country.

Lt. Gen. Hashim: The idea behind the establishment of the Kuwait National Guard arose in 1967, during the reign of the late Kuwaiti Emir His Highness Sheikh Jaber Al-Ahmad Al-Jaber Al-Sabah while he was crown prince. The idea became reality through Decree-Law No. 2 of 1967, issued on November 6, 1967, which established the Kuwait National Guard under the reign of the late Emir of Kuwait His Highness Sheikh Sabah Al- Salem Al-Sabah. Since its inception, the National Guard has been headed by Sheikh Salem Al-Ali Al-Salem Al-Sabah and his deputy, Sheikh Meshal Al-Ahmad Al-Sabah.

According to this decree, the National Guard is independent of the military and the police, and enrollment is carried out through voluntary enlistment of citizens. It is entrusted with supporting the Armed Forces in defending the land of Kuwait and safeguarding its freedom and independence. It assists public security agencies in maintaining Kuwait’s security and protecting the home front.

Since the time of the decree, National Guard forces have received the full support, care, and attention of the political leadership, so that they fulfill their duty to defend the homeland against all those who may possibly defile its sacred soil, maintain security and stability. These forces protect the home front against any threat and to secure vital facilities and state agencies and maintain readiness to carry out any other task assigned to them, in conjunction with the military, police, general directorate of civil defense and the Supreme Defense Council. The National Guard plays a constructive role in society.

Unipath: Your excellency has many achievements during your military career. Please name a few that hold the most meaning to you.

Lt. Gen. Hashim: I had the honor to join the National Guard in 1988 as an engineering officer with the rank of first lieutenant. I was the first engineer to join the National Guard at that time and was among those who introduced modern systems for administrative and logistical support. I contributed to the development of the armament system based on up-to-date technology during the period (2005 to 2007) when I was chairing the Armament Committee in the Kuwait National Guard. I helped equipped the Kuwait National Guard with state-of-the-art equipment and tactical vehicles and equipment, and that represented a qualitative step in this organization’s journey.

On March 2, 2010, I assumed the position of commander of military indoctrination and sought to enhance military training curricula, activate simulated training systems and introduce a computer literacy certification program called the International Computer Driving License. The training system witnessed a remarkable improvement due to the modern techniques that were introduced, including e-learning and the introduction of modern information systems.

Among recent achievements is the Kuwait National Guard’s induction into the International Association of Gendarmeries and Police Forces with Military Status. This allows us to exchange experiences with pioneering countries in the field of security, counterterrorism and crisis management.

Unipath: How has the Kuwait National Guard benefited from joint military exercises with security forces beyond Kuwait?

Lt. Gen. Hashim: Without a doubt, joint military exercises enhance bonds of partnership and relations among countries, promote exchange of experiences and help build capacities. Joint exercises have advanced combat capabilities and readiness. We focus on developing joint action among participating forces to achieve maximum benefit. During the exercises, we are keen to assess our performance, identify strengths and weaknesses, and draw lessons learned. At this time we are preparing for the Eagle Resolve exercise with friendly and brotherly countries that include the United States.

Unipath: Kuwait is one of the strongest strategic allies of the United States. How would you describe the current relationship and partnership between the two countries?

Unipath: What are the features of the strategic development plan for the National Guard titled

Lt. Gen. Hashim: The National Guard Strategic Plan (2020) was launched by His Excellency National Guard Deputy Chief Sheikh Mishal Al-Ahmad Al-Sabah under the slogan “security first,” and it pursues a national dimension that protects the sovereignty, legitimacy, constitution, people and values of the state of Kuwait by maintaining security and stability and supporting national defense and security plans and objectives to translate the lofty vision of His Highness the Emir of Kuwait and the Chief Commander of the Armed Forces to advance Kuwait as a financial and commercial center.

As for the plan’s vision, it is to strive for excellence in security and military operations and institutional governance through high-quality leadership, competence and full readiness for a highly professional force.

Other sections deal with improving capabilities, including building a helicopter unit and providing whatever it needs to carry out its missions like specialized training and qualification tests. Another part deals with activating a chemical and radiological monitoring center, expanding the scope of military and technical research and studies related to energy and other matters, and training anti-terrorist and riot brigades.

Protect the sovereignty, legitimacy, Constitution, people and values of Kuwait by maintaining security and stability and supporting national defense and security plans and objectives.

Strive for excellence in security and military operations and institutional governance through high-quality leadership, competence, and full readiness of a highly professional force.