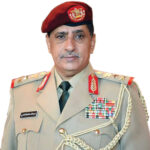 “This is my land, which will never kneel To any authoritarians; This land will only accept National honor and grandfathers’ dignity; My land’s determination and great history Inspires its spirit of steadfastness.”

Vice Adm. Abdullah Salim Ali Abdullah Al-Nakhai, adviser to the Yemeni minister of defense and commander of naval forces, exemplifies the resilient spirit of those inspiring words. Despite being a first-class professional commander, the admiral is renowned for his modesty, qualities that have earned him the respect of his troops and his colleagues.

Adm. Al-Nakhai expressed his pride in and appreciation for the sacrifices and heroism of Yemeni forces on various fronts as they defend their homeland in the battle imposed by Iranian-backed Houthis. If the nation is to overcome these challenging headwinds, it needs leaders dedicated to making strenuous efforts toward security and stability.

Unipath: Can you discuss your professional life?

Vice Adm. Abdullah: In November 2018, I was appointed by presidential decree as chief of staff of the Armed Forces and promoted to the rank of vice admiral. Before that, I served many roles. In addition to commanding the country’s Naval and Coastal Defense Forces, I commanded missile boats and artillery boats. Training troops has also been a large part of my career. I served as director of the Maritime Training Department, head of the Navigation Division and leadership training for the Navy, and director of the Naval School for the Naval and Coastal Defenses. I have also continued my military education abroad through conferences and seminars in places like the United States, Bahrain, Qatar and the United Arab Emirates.

Going back several decades, I received a bachelor’s degree in maritime navigation in Baku, Azerbaijan, formerly in the Soviet Union. I received a master’s in military studies, leadership and foundation in 1999 from the Supreme Military Academy in Damascus, Syria. I then received a fellowship from the Supreme War College in Sanaa from 2011 to 2012.

Unipath: How are other countries cooperating in terms of military training and preparation?

Vice Adm. Abdullah: Joint cooperation is critical to the stability, security and safety of the region. By working together, we can confront challenges that threaten regional security and undermine the stability and safety of our countries and peoples. We must strengthen relations with other countries and ensure that Yemen’s interests are protected. This is important considering the ongoing threat of terrorism in Yemen, the Arabian Gulf and the wider world.

The Yemeni general staff is working on the rehabilitation of the naval forces and is proceeding at a steady pace. This will have a significant impact on the military performance of the Army and naval forces.

With regard to the restructuring of the general staff, we have a development plan developed in coordination with the political and military leadership. In the next phase, the general staff will not disperse Yemeni training staff across all military fields but will focus existing expertise on rebuilding our Armed Forces on the basis of modern methods. Commanders and trainers will have roles in the development and modernization.

As for the situation on the ground, I would like to point out that the indicators from all fronts, including the Hodeidah Front, are in accordance with the revised plan of the leadership of the Arab Coalition to Support Legitimacy in Yemen, the Yemeni government, the Yemeni National Army and the popular resistance until the militias that conducted the coup are eliminated.

All military sectors and the Arab coalition forces are working as one team, in constant coordination in all military aspects. The Arab coalition has provided all capabilities for the Yemeni National Army, necessary equipment and Soldiers on the fronts. Thanks to this support, victory will be achieved on major fronts in which the Army is engaged in battles to defeat the Houthis.

Unipath: After Naval and Coastal Defense Forces infrastructure was nearly obliterated, what is the plan to restore capacity and readiness?

Vice Adm. Abdullah: It is necessary to maintain, restore, rebuild and redevelop the foundations of the Naval and Coastal Defense Forces, especially following the destruction of naval vessels. Ships receive repairs at stations set up in Al Hodeidah, Aden and Al Mukalla. Destruction was not limited to naval installations. The Naval Institute and the Naval School — both educational institutions — were also ruined.

We realize this ambitious plan will take a lot of time, resources and work. We hope to build a professional and national naval force loyal to God and country that can protect the country’s 2,000 kilometer coastline and prevent our waters from being overfished. These are no easy tasks.

Our forces are composed of the leadership of the Naval and Coastal Defenses, floating naval units, coastal defense units and the Marine Corps. The Air Force operates naval military bases, such as the naval base near Al Mukalla, the Tawahi and Al Hodeidah naval bases in the Aden governorate, the Bir Ali base in the Shabwa governorate, and a base on Socotra Island.

Unipath: What challenges does Yemen face in its fight against piracy?

Vice Adm. Abdullah: Yemen’s strategic location on the Bab el-Mandeb and the Arabian Sea presents unique challenges. Add to that the country’s domestic political, military and security situation — as well as the presence of terrorist organizations at home and in Somalia and the Horn of Africa — and the military has its hands full. Over the past decade, the coast of the Indian Ocean, the Gulf of Aden and the Bab el-Mandeb have suffered from exposure to pirates, threatening international navigation and shipping and regional maritime security.

Curbing piracy in Gulf of Aden and the Bab el-Mandeb is a task Yemen’s Navy views as urgent. Increasing the number security patrols in the country’s territorial waters is only one response. Yemen has also agreed to establish a regional center in Sanaa to combat piracy, a joint undertaking of Yemen’s Ministry of Transportation and the International Maritime Organization. The center would coordinate among countries bordering the Gulf of Aden and the Red Sea, sharing information to combat piracy with international naval forces.

Admittedly, Yemen’s Naval and Coastal Defense Forces could do more to defeat piracy if we could upgrade and repair boats lost during the fighting. Furthermore, we have looked to our partners to help us create specialized units — similar to U.S. Marines — to defend ports such Aden, Al Hodeidah and Al Mukalla and around Socotra Island. Finally, Yemen needs to maximize use of technology to monitor hard-to-reach coastlines popular with smugglers and pirates. That means using surveillance stations equipped with radar.

The Importance of Youth