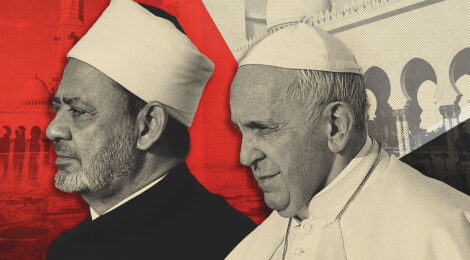 Unipath / January 15, 2020 / Comments Off on A Religious Brotherhood / Features

His Highness Sheikh Khalifa bin Zayed Al Nahyan, president of the United Arab Emirates, announced that 2019 would be a Year of Tolerance, with the UAE serving as a global capital of tolerance and affirming the values of dialogue, pluralism, acceptance of others and openness to different cultures.

The country didn’t wait long to affirm what those values mean in practice. Pope Francis held a Christian service attended by more than 150,000 worshipers in Zayed Sports City Stadium in Abu Dhabi. The February 5 Mass was the first of its kind: The pope of the Catholic Church had never led a religious service on the Arabian Peninsula.

“I wish to express my appreciation for the commitment of this nation to guaranteeing freedom of worship and to confronting extremism and hatred,” Pope Francis said during his visit to the Emirates. “Even as the fundamental freedom to profess one’s own beliefs is promoted — this freedom being an intrinsic requirement for a human being’s self-realization — we need to be vigilant, lest religion be instrumentalized and deny itself by allowing violence and terrorism.”

The gathering at the stadium was just part of the reason for the pope’s visit. Equally monumental was the choice by Pope Francis and Sheikh Ahmed al-Tayeb, grand imam of Al-Azhar, to sign the Document on Human Fraternity for World Peace and Living Together. Sheikh Ahmed made a plea for religious cooperation between Muslims and Christians based on common citizenship and deep historic roots.

“Continue to embrace your Christian fellow citizens in all places. They are our compatriots and brothers, whom the Holy Quran reminds us are the nearest to us in affection. Christians’ hearts are full of goodness, compassion and mercy. We Muslims must not forget that Christianity embraced Islam when our religion was born and protected it from the tyranny of idolatry and paganism,” Sheikh Ahmed said. 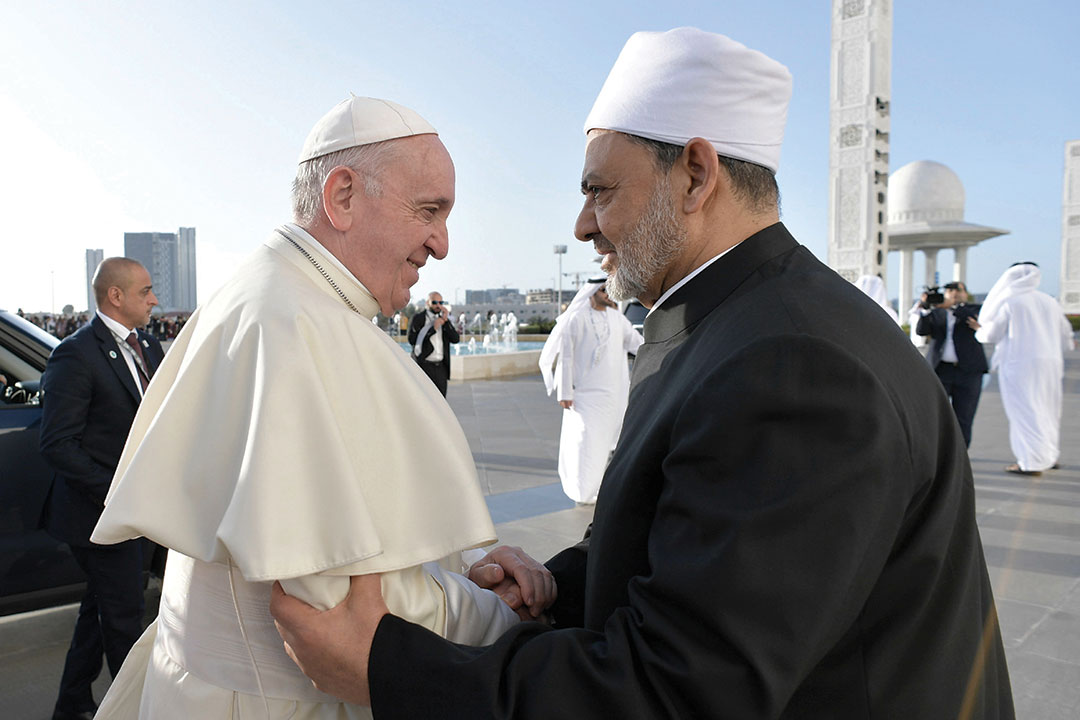 A first-time visitor to the UAE will notice diverse ethnicities and religions living together in peace and stability, a sight rarely seen elsewhere in the region. From the pulpits of the mosques, prayers are held for Muslims of every doctrine. More than 200 nationalities are represented among the people living in the territory of the UAE, making it the most diverse country in the world regarding the number of nationalities residing within its boundaries. According to a 2010 estimate, the population of the UAE is 7.3 million, including 1 million Catholics served by eight churches.

On the evening of February 4, 2019, Pope Francis met with Grand Imam Ahmed and members of the Muslim Council of Elders at Sheikh Zayed Grand Mosque. The pope then moved on to the Founder’s Memorial to sign the Document on Human Fraternity in the presence of  Sheikh Mohammed bin Rashid Al Maktoum, the UAE’s vice president and prime minister and ruler of Dubai.

Sheikh Mohammed bin Rashid Al Maktoum commented, through a tweet, on the choice of the UAE’s renowned ghaf tree as the emblem for the Year of Tolerance:

“Tolerance is a universal value, and the ghaf, our native national tree, is a source of life and symbol of stability in the middle of the desert. It shaded our ancestors with its leaves as they gathered to discuss the matters affecting their lives. In the Year of Tolerance, we take it up as an emblem, so that we may all be sheltered in the cool shade of tolerance, coexistence, and diversity.”

Sheikh Mohammed bin Zayed Al Nahyan also affirmed the UAE’s determination to continue along the path set by the founding father of the nation, Sheikh Zayed bin Sultan Al Nahyan, in spreading the message of tolerance and love.

“The world is large enough for us all, and diversity is a source of richness, not a cause for conflict or fighting. God has created us differently to complement each other and to know one another and cooperate for the good, peace and development of all,” the crown prince said.

In a speech, Grand Imam Ahmed spoke of how the tolerance document was born of a shared meal in Rome with the pope and a common belief that, as religious leaders, they were responsible to God for the poor, widows, orphans and the oppressed. 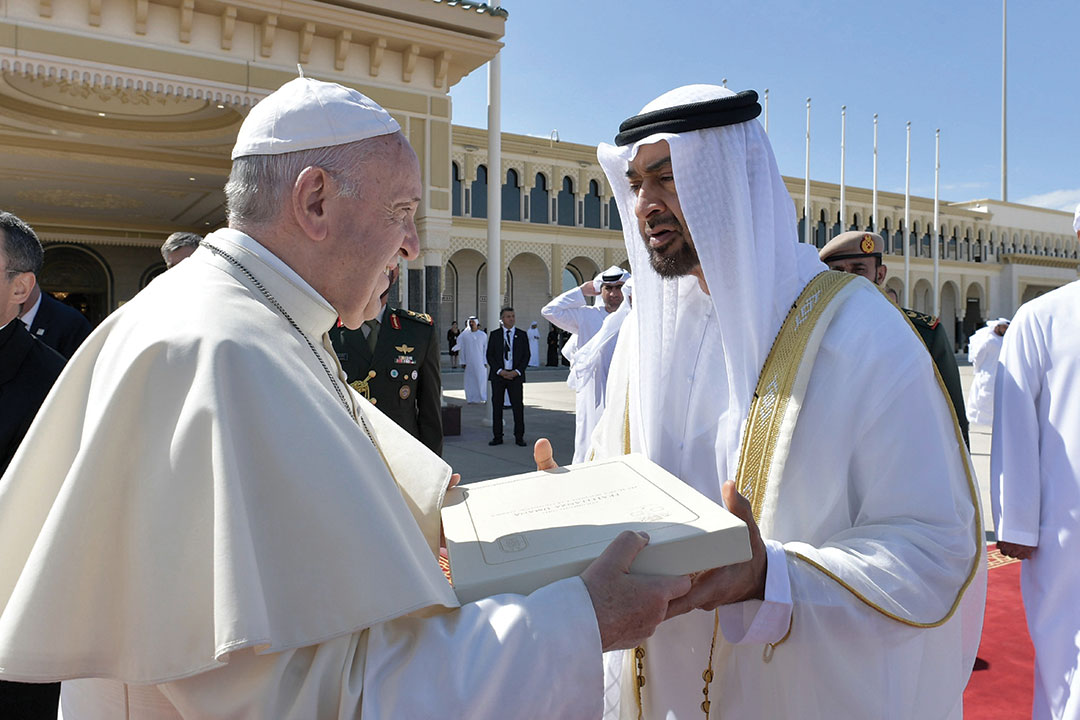 He condemned terrorists for being “murderers, shedders of blood, and enemies of God and his messages.”

“In this document, we call for an end to the use of religions and doctrines to fuel hatred, violence, and blind bigotry, and for an end to the exploitation of God’s name to justify acts of murder, displacement, terrorism, and oppression,” Grand Imam Ahmed said. “God did not create people to kill, torture, or be subject to harassment in their lives and livelihoods, and God Almighty has no need of those who would call for taking lives or killing others in his name.”

Pope Francis began his speech with the Islamic greeting, as-salaamu ‘alaykum (peace be upon you). He expressed gratitude to the leaders of Egypt and the UAE for their commitment to religious tolerance.

“Here in the desert you have opened a fertile path to growth and progress stemming from the work of citizens belonging to many peoples and cultures, including many Christians who have contributed to the growth and prosperity of the country,” the pope said. “They bring with them the culture of their faraway countries and civilizations to work in the image of a nation that accepts and embraces all.”

Pope Francis invoked the story of Noah and the flood, saying that the world’s religions must ride in the Ark of Peace together as one family:

“I came here as a believer thirsting for peace, praying that we may be instruments of peace. The emblem of this journey depicts the olive branch and the dove of peace. We all remember that God asked Noah the Prophet to enter the ark along with his family. Today, we need to enter together as one human family into an ark that can sail the stormy seas of the world,” he said.

“It is an ark of strength, and the point of departure is that God is the Creator of all things and wants us to live as brothers and sisters. Fraternity is established here at the roots of shared life, on the basis that all persons have equal dignity and that no one can be a master while others are slaves.”