A Partner in the Northern Arabian Gulf

Despite contested territorial waters and terrorist attempts by organized crime gangs, the Iraqi Navy has proved it can protect maritime navigation in the northern Arabian Gulf as well as play an important role with regional and international partners in securing the Gulf. Unipath interviewed Lt. Gen. Ahmed Jassim Maarij, commander of the Iraqi Navy, about its achievements, its international partnerships and his plans to improve Iraq’s naval capabilities.

Unipath: How does the Iraqi Navy conduct its mission? 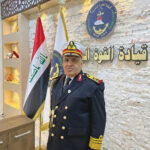 Lt. Gen. Maarij: Naval Command protects Iraqi territorial waters and the coastline as well as oil terminals and supplementary loading platforms. Responsibilities include protecting Al-Faw port, the commercial ports of Umm Qasr and Khor Al-Zubair as well as the cities of Umm Qasr and Khor Al-Zubair. It also carries out search and rescue missions at sea.

Unipath: What challenges do you face carrying out these duties?

Lt. Gen. Maarij: There are a number of challenges confronting our leadership when it comes to implementing its duties, the most significant being overlapping territorial waters with neighboring countries. This is the biggest challenge facing leadership. Another major challenge is the abundance of commercial traffic, especially boats designed for fishing that sail near oil ports and naval operations yards. They can be used for various illegal activities such as piracy and drug smuggling alongside their use for fishing. We have worked very hard to curb illegal operations at sea by stepping up patrols and conducting sting operations in the area.

Unipath: What is the role of international partnerships in defending freedom of navigation
in the Arabian Gulf?

Lt. Gen. Maarij: Threats in the maritime domain impress on us that a single nation, irrespective of its military capability and political will, is not capable of dealing with those threats on its own, especially in a region like the Arabian Gulf, where the global economy depends on the trade that passes through it. Therefore, the development of a unified plan of action for all countries of the region, in coordination with the U.S. Fifth Fleet, that includes continuous maritime surveillance and patrols, intelligence gathering and the exchange of information, is essential for addressing numerous maritime security challenges.

Unipath: The Iraqi Navy, in coordination with the specialized Explosive Ordinance Disposal (EOD)
Unit at the Ministry of Interior, recently removed a mine from a ship anchored in a troublesome area. Describe the operation.

Lt. Gen. Maarij: Our Navy made great efforts to remove the limpet mine from an oil tanker, the MT Pola, in January 2021. The intervention and rapid response of our Navy was a clear example of the heroism of the officers and enlisted men. An operations room was established to manage the demining process with the participation of a number of small and midsize patrol boats in addition to a detachment of divers and the Ministry of Interior EOD unit. The patrol boats evacuated ships, tankers and fishing boats from the vicinity of the Pola, while speedboats transported the divers who approached the mine and dressed it in a way that ensured its safe removal from the tanker’s hull before pulling it off. The mine was then detonated in a safe area by the EOD unit.

Unipath: Has this event caused the Iraqi Navy to think about establishing a specialized EOD team or about adding a minesweeper to the fleet?

Lt. Gen. Maarij: We already had plans to enhance the fleet with a minehunter and mine countermeasure systems before the limpet mine incident on the MT Pola. This incident and incidents before it in the waters of the Arabian Gulf encouraged us to think seriously about the need to secure this technology. We are now working to prepare a number of officers and noncommissioned officers to enroll in specialized courses on naval mine countermeasures.

Unipath: How do you cooperate with the United States in policing the northern Gulf?

Lt. Gen. Maarij: There is cooperation and coordination with the U.S. Fifth Fleet based in Bahrain, where we have a liaison officer with the Fifth Fleet who coordinates and exchanges information and carries out other activities in the northern Gulf region.

Unipath: All the Gulf countries have periodic bilateral exercises with either the U.S. or British Navies. Is Iraq interested in such exercises?

Lt. Gen. Maarij: Since 2005, we have been participating in exercises with the U.S. Fifth Fleet by sending naval vessels or observer officers. In some exercises, a number of officers and noncommissioned officers are sent to participate as observers on foreign naval vessels participating in the exercises. There are also trilateral exercises in which our Navy has taken part alongside the Kuwaiti and U.S. navies, but due to the coronavirus pandemic, we have not participated in any exercise during this period.

Unipath: How are naval personnel selected and trained?

Lt. Gen. Maarij: We have the Arabian Gulf Academy for Naval Studies, which specializes in naval science and engineering and prepares naval officers, engineers and midlevel noncommissioned officers to supplement our command with young Navy personnel. We also have a naval school that specializes in courses aimed at developing the skills of officers and noncommissioned officer grades in various naval disciplines.

Unipath: How can you improve the Navy’s capabilities?

Lt. Gen. Maarij: First we would like to build a base at Al-Faw Grand Port that will house a number of formations and naval battalions composed of various warships and gunboats with sophisticated armaments to ensure the implementation of maritime duties. Second, we would like to enlist modern hardware and equipment to improve naval intelligence and reconnaissance.

A Shining Example of Cooperation

The Necessity of Partnerships