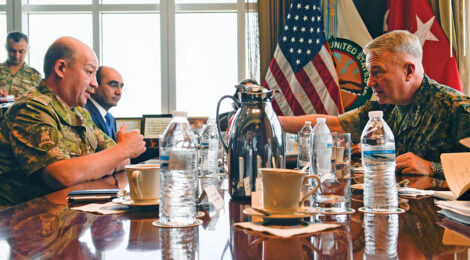 Unipath / June 25, 2020 / Comments Off on Uzbekistan Updating Military Education / Around the Region, Departments

A military delegation from Uzbekistan visited U.S. defense colleges in September 2019 with the intention
of improving how the country trains
its officers.

Led by Uzbek Deputy Minister of Defense Azizbek Ikramov, the delegation explored the National Defense University in Washington, D.C., the U.S. Army War College in Pennsylvania, and the Near East South Asia Center for Strategic Studies.

The Uzbek Defense Ministry noted that the National Defense University provided the delegation with valuable information about “infrastructure, the general approach to training military personnel, and about basic principles of curriculum development for professional military education courses.”

Improving his country’s system of professional military education has been a priority for Uzbek President Shavkat Mirziyoyev. For years after declaring independence from the then-Soviet Union, Uzbekistan struggled to break fully with its past in terms of its overly rigid, ideological system of military education.

Things began to improve in 2012, when NATO agreed to provide assistance though the Defense Education Enhancement Program. Uzbek troops have traveled to the U.S. to receive training in subject areas such as the English language, aviation and military strategy. Special operation forces from Uzbekistan have trained successfully with the Mississippi Air National Guard in an exercise called Southern Strike.

Uzbekistan returned the favor in September 2019 by inviting U.S. transport pilots to train at an Uzbek airfield to acclimate themselves to desert and mountain conditions.