Oman was honored for having one of the most reliable police forces in the world.

In the World Economic Forum’s “Global Competitiveness Report,” released in October 2018, the Royal Oman Police (ROP) ranked fifth in the world and first in the Arab world for reliability.

It was one of dozens of categories of a Global Competitiveness Index on which 140 countries were ranked to gauge their economic strengths. Oman also ranked best in the world for having the fewest terrorist incidents and fourth best in the world for its relative absence of organized crime.

“It’s our duty to achieve the highest level of security and safety for all in this dear homeland, as well as harness the human and material resources to build a modern police force with strategic and practical planning to keep abreast of the developments, changes and security phenomena that are taking place in our modern world,” one police official informed the Times of Oman.

Foreign businessmen living in Oman vouched for the country’s accomplishments in the field of security.

“This is one of the safest countries in the world,” said Rajkumar Iqbal Ahmed, chief executive officer of Al Khalij Heavy Equipment and Engineering.

“Wherever you go in this country, even if it is late at night, you know the place is safe for both women and children. Oman is also strategically situated, and people here are really willing to work, so I am not surprised that this place is called the Switzerland of the GCC [Gulf Cooperation Council].” 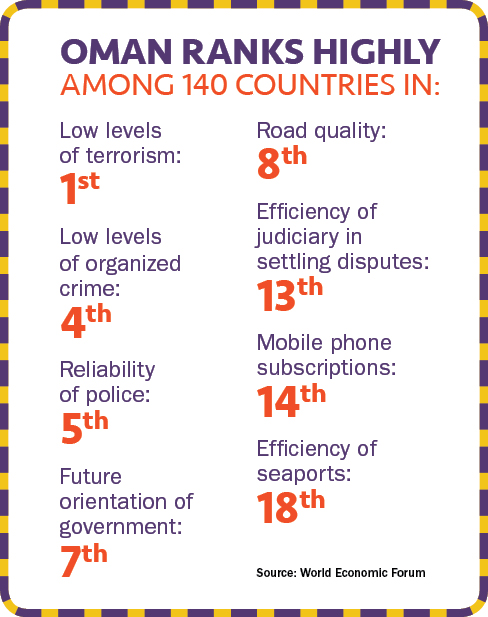 Other areas in which the sultanate scored highly included ranking first among the Arab countries for property rights, intellectual property protection and cooperation between employers and employees. It also is a global leader in using the internet to connect with its citizens, a phenomenon known as e-government.

Overall, the country moved up 14 places on the 2018 competitiveness index, placing 47th out of 140 in the world.

A Vision of Unity