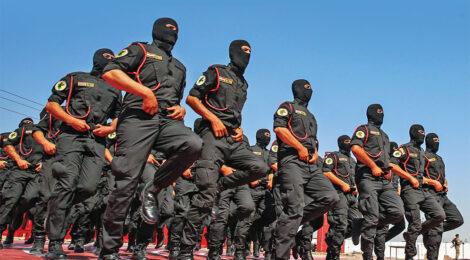 Terrorists attempting to hide in the rugged triangle formed by Salah al-Din, Kirkuk and Ninevah governorates in northern Iraq were ousted from their lairs during joint operations that began in March 2020.

Iraqi forces targeted Daesh remnants seeking to reorganize their ranks and carry out large-scale terrorist operations as they had in the past. Dozens of terrorists were killed in operations that engaged Iraqi military helicopters, Air Force jets and mechanized ground forces.

In early March 2020, the Iraqi Counter Terrorism Service (ICTS) killed 25 Daesh militants in the Qara Chokh Mountains in Ninevah using airborne troops and U.S. air power. The battle between the ICTS and Daesh lasted for hours and ended with the destruction of terrorist forces and the tunnels in which they were hiding.

The operations would have been less effective without the support of Iraqi citizens who flooded toll-free hotlines with reports on the activities and hideouts of Daesh.

Iraqi forces have succeeded in dismantling several terrorist networks near Qara Chokh, Irbil governorate, the districts southwest of Kirkuk, parts of Salah al-Din governorate and western Anbar governorate. Militants were killed by airstrikes while holed up in caves and underground bunkers.

In December 2017, then-Prime Minister Haider al-Abadi declared victory over Daesh, announcing the end of more than three years of battles to regain control over nearly one-third of Iraq that had fallen under Daesh occupation. But according to military estimates, thousands of terrorist fighters remain at large in Iraq and Syria.

“Although the territory once held by the so-called caliphate is fully liberated, Daesh fighters still exhibit their intention to exert influence and stage a comeback,” said then U.S. Maj. Gen. Chad Franks, deputy commander-operations and intelligence for the U.S.-led coalition.  Sources: The New Arab, Military Times