An Authority on Airpower 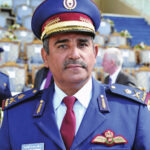 A fighter pilot who commands the Qatar Air Force, Maj. Gen. Salem has spent much of his 37-year career organizing, training and equipping Air Force units to ensure the security, sovereignty and integrity of his nation’s airspace.

He was instrumental in the creation of the air college and served as its first commander starting in 2009. The air college’s supporting specialties received his full attention: to develop the skills of Air Force officers in the field of fighter guidance and air control.

“It is one of the best aircraft. It is a strong plane and I hope to fly by myself next time,” the general said after enjoying an F-15 demonstration at Al Udeid Air Base. “It will be the backbone of my Air Force and I look forward to receiving it.”

Gen. Salem began his flying career as a young lieutenant in the 1980s. He received his initial pilot training at the King Faisal Air Academy in Saudi Arabia — where he was awarded a flying trophy for being the top pilot — and traveled to Great Britain for advanced flight training. He has accumulated more than 2,400 flying hours on a variety of jets such as the French Mirage F1, Mirage 200, the PC-21 training aircraft, the British Strikemaster, and most recently the French Rafale aircraft. He is one of the few Air Force commanders who still actively flies.

He has commanded several squadrons in defense of Qatar, including the Air Excellence Squadron and the 11th Fighter Wing Squadron. Gen. Salem took part in several Qatar Emiri Air Force missions such as the Gulf War to liberate Kuwait and Operation Unified Protector in defense of Libyan stability.

In 2002, he arrived at U.S. Central Command Headquarters in Tampa, Florida, to serve as senior national representative for Qatar. He views his country’s relationship with the U.S. military as critically important. Al Udeid Air Base near Doha hosts about 13,000 U.S. troops, mostly Air Force personnel.

“It is important to be able to meet as friends and exchange information,” the general said. “The unity and partnership between the United States and Qatar is based on a common vision of being ready to defend and preserve security, peace and stability in the region.”

Qatar aims to make the air college the leading flight training and aviation center in the region and takes pride in its international certification. Among the nearly 100 students receiving bachelor’s degrees in the graduating class of January 2020, nine came from Kuwait others from the Republic of Rwanda. Iraqis have also enrolled at the college.

Women have made great strides in the Air Force under Gen. Salem’s leadership. During the January ceremony to award diplomas, Gen. Salem witnessed the graduation of Lt. Al-Jazi Al-Nasr, the first Qatari woman trained as a fighter pilot.

Qatari women already fly helicopters, but Lt. Al-Jazi is the nation’s first female fighter jet pilot. The general assured attendees at the air college graduation ceremony that she would not be the last.

The main purpose was to introduce the F-15 to Qatari officers in preparation for delivery of the aircraft to Qatar starting in the summer of 2021. In return, U.S. Air Force officers learned about Qatar’s existing fleet of Mirage and Rafale fighter jets.

The event was organized with the participation of Lt. Gen. Ghanem bin Shaheen Al-Ghanim, chief of staff of the Qatar Armed Forces and also a pilot by training. Gen. Salem studied the capabilities of the F-15 from the back seat of the cockpit on a “familiarization flight.” Qatar has agreed to upgrade Al Udeid to accommodate the F-15 and other fighter aircraft.

“Given the importance of this partnership to the state of Qatar, we have begun to work in full swing to develop Al Udeid Air Base to increase the operational efficiency and capacity of operations led by our allies,” Lt. Gen. Ghanem said.

“We welcome the presence of our friends in the American Armed Forces in their second country, Qatar, and we are ready to strengthen the partnership between our Armed Forces and our allies in the state of Qatar in a way that contributes to enhancing regional and international security and stability.”

As the Qatari leadership made clear with its 2019 appointment of Gen. Salem to command the Qatar Emiri Air Force, the general will be a prominent advocate of increased cooperation with the U.S. and other partners in the name of regional peace.